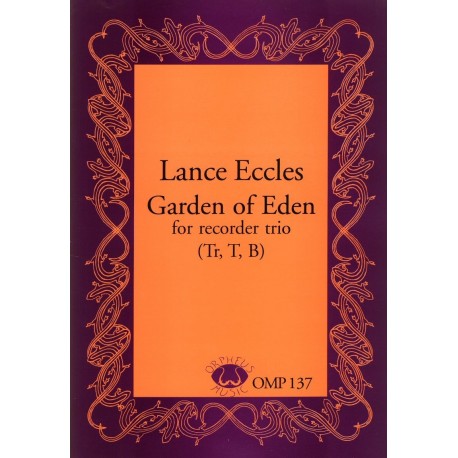 *Contemporary Pieces.* Evocative set of programmatic pieces with some chromaticism and crunchy harmony.

Since 1982, Lance Eccles has been a member of the Reluctant Consort, a recorder group based in Sydney, Australia. Nearly all of his recorder compositions and arrangements were written for that group or for the meetings of the Sydney Society of Recorder Players. By profession he is a senior lecturer in Chinese at Macquarie University, also in Sydney.

This work comprises three titled movements. The first movement, "Eve Awakens", one might assume to mean her awakening to good and evil, as there is a lot of harmonic and rhythmic tension between the voices. The faster main section is dominated by a 3+3+2 rhythmic pattern.

"Tasting the Forbidden Fruit" was the Trinity Consort's favourite of the three. It is very flowing and would be an excellent exercise for breath control. Its two themes consist of an arpeggiated one containing a Neapolitan sixth (a triad built on the lowered second degree of the scale) and a languorous melody entrusted to the treble.

"Flight from the Garden" would also make a good warm-up exercise, with its constant eighth-note repeated patterns of alternating fifths, fourths and thirds, and its fast tempo