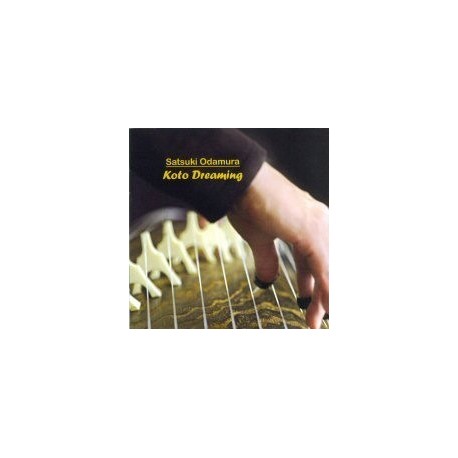 Koto Dreaming reflects Satsuki's development within her adopted musical community, and bridges the two worlds that she now works within - that of the conventional score-based composition, and that of her collaborations with composer-improvisers. Koto Dreaming takes it title from a commissioned work by the celebrated Australian composer Ross Edwards. It also contains pieces by composers Caroline Szeto, Anthony Briggs, Linsey Pollak, and by Satsuki herself in collaboration with Sandy Evans and Tony Lewis - who together comprise the trio Waratah.

*Composers* - Ross Edwards, Linsey Pollak, Caroline Szeto, Anthony Briggs, Sandy Evans, Tony Lewis, Satsuki Odamura.Satsuki Odamura is a master of the koto. A representative of the Sawai International Koto School, Satsuki has pioneered the introduction of teaching & performing on this ancient Japanese instrument since her arrival in Australia in 1989. Satsuki has performed with critical success in Japan, Europe, the USSR, the United States, South East Asia and of course all over Australia.One of Satsuki's greatest achievements has been to create opportunities for people outside the Japanese tradition to compose for the koto, thus bringing new perspectives and dimensions to the instrument's possibilities.

Press Extracts
- "Always a sense of spontaneous drama" Peter McCallum
- "Odamura's playing is spell-binding, now delicate, now almost violent" 24 Hours
- "In performance Satsuki Odamura is remarkable to watch and to hear" RealTime
- "Ms. Odamura [represents] a new generation of koto performers who are intent on crossing traditional lines, pushing themselves and their instruments to new frontiers and viewing their instrument as an instrument of the world" Ethnomusicology
- "Satsuki Odamura's first touch of the koto on this album made my hair stand on end" Sydney Morning Herald

18 other products in the same category: