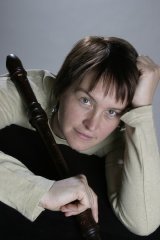 She is a recorder specialist, active in the areas of performing, composing, teaching and publishing.

Zana has performed extensively throughout Australia and New Zealand, has recorded and directed many CDs and is a popular presenter at seminars and workshops. In addition, Zana is an active teacher of recorder in Armidale, where she is the director of a highly acclaimed youth ensemble.

She has carried out pioneering work in several areas of technique. In particular, that of vocalised recorder, which forms the basis for her solo CD, Dreams Inside the Air Tunnel. This CD features her own compositions using the recorder played simultaneously with voice.

"The music on this recording is intriguing and beautiful. Zana's recorder playing is unique and she creates wonderful timbres and harmonies."

Zana continues to perform and record with a variety of ensembles. Between 1990 and 1992 she performed with the Weird Sisters (a contemporary trio), whilst more recently she has concentrated her performance career with Cantigas (a Medieval quartet) and Nardoo (contemporary improvising duo). With these groups, Zana has recorded 5 CDs.

Zana is an innovative teacher. She has developed a unique approach to recorder teaching that focuses on musical imagination and expression. Zana teaches a large number of advanced students from Northern New South Wales, conducts master classes for students from the Eastern States of Australia and has taught at workshops throughout Australia and in New Zealand. Zana has also taught Medieval improvisation and early instrumental music at the University of New England and has conducted many workshops in the Baroque repertoire. She has facilitated and directed two CDs for her advanced students performing as 'Batalla Famossa', an ensemble that specialises in contemporary Australian music. Her commitment to the development of music within the local area is reflected in her role as President of the Armidale Eisteddfod Society during 1998 and founding president of the Armidale Recorder Society.

Zana Clarke is also the founding and current artistic director of Orpheus Music, a position she has held since 1994. In this role she supervises the publication of Australian recorder music with Orpheus Music and the selection of works for sale through Allspice Recorder Music; is joint editor of the Australasian Recorder Magazine, Cinnamon Sticks, and organises concerts, workshops, international music festivals and smaller gatherings of musicians, teachers and players in Australia and New Zealand.

"Lyrical Passions" and "Dreams Inside the Air Tunnel" are only two of Zana's recordings. As part of the group Cantigas, she features on these recordings:

In addition, Zana continues to record albums as part of duo Nardoo. The duo's albums to date are:

OMP001 Behind My Right Shoulder