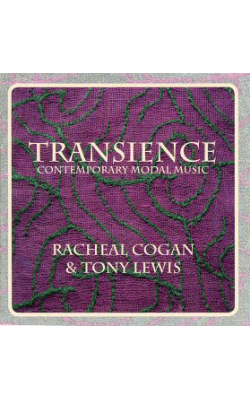 Racheal Cogan (recorders) and Tony Lewis (percussion) perform captivating melodies and rhythms informed and inspired by the music of many cultures. Their unique repertoire includes traditional music from Greece, Turkey and Iran, as well as compositions by Racheal Cogan and Ross Daly.

Racheal Cogan (recorders) and Tony Lewis (percussion) perform captivating melodies and rhythms informed and inspired by the music of many cultures. Their unique repertoire includes traditional music from Greece, Turkey and Iran, as well as compositions by Racheal Cogan and Ross Daly. Racheal and Tony's work is drawn from an impressive amount of first hand experience in the study and performance of musical forms from across the world, spanning Asia, Africa, Europe, the Middle East, the Pacific, and the indigenous music of Australia.

Racheal Cogan has worked extensively in modal music forms around the world. In Melbourne in 1993 she co-founded the Greek music group the haBiBis, whose CD Intoxication won an ARIA award in 1999. In 2000 she travelled to Athens to study, perform and record with Ross Daly and his ensemble Labyrinth throughout Greece, Turkey, and Macedonia. Since then she has studied Persian classical music with Hossein Omoumi in France, Karnatic Music with Karaikudi R. Mani in India, and performed with Kurdish musician Fardin Karamkhani in the USA.

Tony Lewis has performed, studied, and conducted cultural exchange project in various parts of Africa, Asia and the Pacific, and in indigenous communities around Australia. He has worked with many of Australia's leading music groups, including Waratah (with Sandy Evans & Satsuki Odamura), The Renaissance Players, Riley Lee, Matthew Doyle, and many others. Tony has composed Major works for the Perth Festival, the Festival of the Dreaming, the Aboriginal Islander Dance Theatre, and Sadari Theatre Company (Seoul).

Racheal and Tony are performing in January 2007 in the Goddess: Divine Energy exhibition at the Art Gallery of New South Wales. You can find more information about Racheal Cogan and Tony Lewis at: www.rachealcogan.com

The repertoire on this recording is a combination of pieces from related origins. Some are pieces that Racheal learnt whilst based in Greece from 2000 to 2002 studying, performing, recording and touring the region with celebrated musicians Ross Daly and Kelly Thoma. Others are pieces that she wrote after her stay there, and that developed from those journeys in Greece, Macedonia, and Turkey. In Greece, Racheal also met and befriended the musician and instrument maker Fardin Karamkhani, who played a significant role in encouraging Racheal to write her own music. He said that to learn other people's music is one thing, but to make your own is, in the end, the only real thing to do. All of the pieces on this recording have since been re-shaped and re-worked by the musical partnership that Tony and Racheal have formed together.

We live in interesting times - not only as human beings and musicians, but also specifically as recorder players. The early music revival in the last half of the last century has succeeded with effects similar to that of other revolutionary cultural movements. We can assess that success by noting the presence of formerly segregated Baroque and Renaissance repertory in mainstream concerts, radio programming, and new media (e.g., webcasting). Medieval music is nudging into those areas as well.

Yet a part of the appeal of the recorder and other early instruments lies in their very "outsider" status in relation to the mainstream of European classical music repertory. Remember, the early music revival occurred in the revolutionary times of the late 1960s and 1970s. So, what's happened to the countercultural energies present in recorder playing, now that formerly outré repertory has been welcomed by the mainstream?

One response has been participation in experimental music, exemplified by Pete Rose, Susanna Borsch, Kees Boeke, and Rara Avis (Terri Hron and Robbert van Hulzen). This has been my avenue of engagement as well, via solo work and Three Trapped Tigers (with David Barnett). However, going experimental is certainly not the only option. The three CDs reviewed here demonstrate three distinct approaches to repertory outside of the mainstream, with audible roots in the soundscape of modal music.

Closest to the familiar early music repertory is Da Camera's A Celtic Celebration. In fact, this CD is a ceilidh, a social occasion for music-making and dancing. Emma Murphy and friends perform 24 tracks with tunes by Turlough Carolan (1670-1738) forming the core. The other works on the disc are by more and less well-known Irish, Scottish and English musicians of the 17th and 18th centuries: John Blow, John Playford, William Byrd, Solomon Eccles, David Mell, John Oswald and Thomas Tollet, and from the Fitzwilliam Virginal Book.

Keeping with the social nature of this Celtic tradition (in which pieces become essentially community property), the ensemble arranges many of the works. Though we tend to regard published music from the British Isles of this time as music for "professionals," in fact this was social music for performance by lovers of the music (a.k.a. "amateurs"). This is certainly very social music.

The members of Da Camera, all active in the London early music scene, play with stylish ornamentation and musicianly virtuosity such that the informal, social nature of these pieces comes to the fore. A great part of the pleasure in listening to this disc is that the instruments sound like themselves - Murphy is not imitating the penny whistle in her recorder playing, nor is Susanna Pell imitating a fiddle with her viol.

To my ears, the most successful tracks are those from the wonderful body of divisions upon popular tunes and chord change patterns. The playing on this disc happily bridges the traditional folk aspects of the Celtic sound and the closely related art-music-tinged popular music of 17th- and 18th-century London.

New York-based recorder players Nina Stern and Daphna Mor take on a different (and less familiar to most American ears) modal repertory with their aptly titled project, East of the River. If the river is the mainstream European repertory, the East to which they turn is Eastern Europe and related cultures.

The 10 tracks on this disc cover music from Bulgaria, Armenia, Macedonia and Italy. Seven of the pieces are traditional, with one from Medieval Armenia (Oor Yés Mayr Im), one from Medieval Italy (the familiar 14th-century Lamento di Tristano), and To the River by Armenian duduk (cylindrical double-reed instrument) virtuoso Djivan Gasparyan.

Recorder playing in this CD is fullbodied and vigorous - a fine example for us all. However, the disc works not only for that model, but also for the wonderful band of accordion, bass, oud and percussion joining the recorders. Uri Sharlin plays accordion in the tradition of reed organs, enriching and filling out the sound to near chamber orchestra dimensions. Percussionists Tomer Tzur and Daniel Freedman drive the motion most effectively - timbrally and through the beats. Omer Avital (bass and oud) is especially effective in Lamento di Tristano.

While we encounter a significant range of expression in the Major and minor tonalities of classical European music, the larger sound-world of modality opens a much greater range of finesse and subtlety. The general sound of modal music beyond tonality is recognizable from the Celtic tradition.

When we dive into Eastern European musics, we meet not only less familiar modes but a marvelous panoply of time signatures beyond duple or triple. Pieces on East of the River employ various groupings of five, seven, nine, etc., yielding a deeply enjoyable asymmetry and entrancing quality. Stern, Mor and company take a direction well worth exploring.

Orpheus Music's 2004 CD Beyond the Fields by Nardoo (Zana Clarke, recorder, and Peter Biffin, various instruments; reviewed in the November 2005 AR) showed how to use the recorder in a genuinely world-music context. Collaborators Racheal Cogan, recorders, and Tony Lewis, percussion, continue that exploration. Transience: contemporary modal music results from Cogan's travels in Greece, Macedonia and Turkey (chronicled in her November 2002 AR article).

Not surprisingly, the sound has a great deal in common with East of the River, with the important difference being texture. Both discs are rooted in excellent percussion work, but in the case of Transcience, the only instruments heard are recorders and percussion. This provides a satisfying, intimate sound.

Cogan composed five of the pieces; world string instrumentalist Ross Daly composed two, and two are from traditional repertories of Turkey and Macedonia. Cogan's compositional work gained impetus from instrument maker Fardin Karamkhani. In the thoughtfully written notes for the disc, Karamkhani is credited with saying that "...to learn other people's music is one thing, but to make your own is, in the end, the only real thing to do." The strength of her creations on Transcience make me glad for Cogan's compositional work, but I believe the statement also points us to the necessity of integrating any music we play in such a way that it becomes our own. This is a core value of much of the repertory on all three reviewed discs.

The ways in which Cogan and Lewis make the music their own provides a striking contrast to East of the River's approach. They share Eastern European modalities, rhythmic structures, and timbrally-focused percussion.

The divergence comes in the use of extended performance techniques by Cogan on three pieces in particular. On For Fardin, she plays two Ganassi recorders simultaneously. (See a video of this at , with links to more of her work.) Her technique with two recorders opens new possibilities - thanks to the Ganassi instruments' open fingerings for "d" and "g", and holding the recorders in one's lap. In Absence, Cogan sings while playing, over a rhythm texture of udu (Nigerian clay pot drum) and llama (rattles of llama's toenails).

The piece that especially grabbed my attention was Nanourisma, a lullaby based on a Greek tune. In this Cogan adeptly sings and plays simultaneously while accompanied by Lewis on Chinese and Korean gongs, Indonesian cow bells and Nepalese temple bowl - a wonderful contrast to the actively dance-like feel of the other pieces. With Nanourisma's earcleansing effect, I found myself refreshed and delighted by the final piece Absence.

I happily continue to play recorder in the outside territory of experimental music, and it is exciting to hear strong, engaging work in other areas outside the mainstream. Recorder players Emma Murphy, Nina Stern, Daphna Mor and Racheal Cogan point to musical borderlands deserving much more exploration.