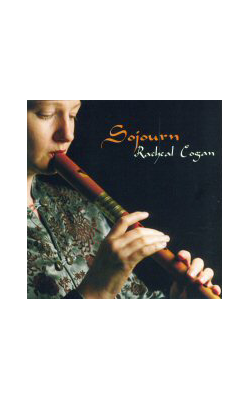 This recording is the culmination of an intense 18 month sojourn Racheal Cogan spent based in Greece, performing and learning with the musicians on this recording. Traditional Cretan music and contemporary modal music which is often improvised. Recorder: Racheal Cogan

The Music
This recording is the culmination of an intense 18 month sojourn based in Greece, performing and learning with the musicians on this recording: Ross Daly, Kelly Thomas and Angeliki Xekalaki.

The two groups of Syrta and the group of pieces from Bulgaria, Thrace and Turkey are pieces either that I learnt with these musicians, or that were directly inspired by them - as in the case of two short compositions of mine. I had already been playing the Medieval and Macedonian pieces for a very long time, and I was delighted to share them with both Kelly Thomas and Angeliki Xekalaki. The Medieval pieces are part of the traditional recorder player's repertoire. I continue to play them because they work so well with the music I have been studying and performing from Greece, Turkey, and more recently, Persia. These are anonymous pieces from a 14th century manuscript found in Italy. We don't really know much about them or what instruments they may have been intended for.

Syrta are a form of music and dance from the island of Crete in Greece. The four Sytra from track one consist of two anonymous traditional melodies called Sfakianos and Gavalohorianos, and two that I have composed. In the contexts in which I have heard and participated in this style of music in Crete, these melodies are often very simple; the sections are repeated many times, often in groups of three and the instrumentalists and singer/s will improvise upon and embellish the melodies within the style. A series of Syrta are often strung together and can last as long as is appropriate in the context of the performance and the musicians' preferences. The magic of these pieces is in the freedom you have to embellish the phrases and the number of times you can repeat them.

It is a living tradition, and good musicians naturally compose their own pieces that contribute to this perpetual and evolving flow. In this music we may know the name of the composer, but often we do not, for it is just not so emphasised as in the Western traditions. Some of the pieces we play could be hundreds of years old, passed on from musician to musician; others may have been composed yesterday. Syrta can be played purely instrumentally, but usually there will be lyrics that are sung with them. This style of music can easily be adapted for many types of instruments, as in the final group of Syrta with lavta, lyra, bendir and daf. Historically, Syrta have been performed on the sfirohabiolo, a traditional wind instrument similar to a recorder, and which can be heard in some recordings of Cretan music. This is a tradition that has almost disappeared in the twenty-first century.

In the pieces Razozko Kalajdzijsko Horo and Tekez I play two recorders simultaneously, the Ganassi in C and the Ganassi in G. I support both instruments on my legs so that I can easily cross over my hands between them for a far greater range of notes without dropping the recorders. I keep the Ganassi in C on the left side as it is the main melody instrument and for most players, playing with the left hand on top is common practice and therefore more comfortable. The drone note on A in the lower instrument is played with all holes open, it is thus a little sharp as it is usually flattened with the middle finger of the right hand. This creates a compromise with tuning when the lower instrument changes to other notes, so I tune the instruments together somewhere between these two poles.

Instruments
The Ganassi recorders in C and G and the low whistle in D are all made in Victoria, Australia, by Michael Grinter.

The Australian recorder maker Fred Morgan developed the Ganassi recorder in the 1970s. He was initially inspired by the capabilities of a recorder described in 1535 by Sylvestro Ganassi in Vienna in his book Opera Intitulata Fontegara - A Treatise on the Art of Playing the Recorder and of Free Ornamentation. Morgan began to search for a surviving medieval instrument that would play the fingerings described by Ganassi with a range of two and a half octaves. This led to the discovery of a recorder in a museum in Vienna that worked with similar fingerings. This instrument provided some good insight and the superficial exterior was used for the new Ganassi. Morgan based the bore dimensions on some experimentation that another recorder maker, Bob Marvin, from the United States had published. Importantly, these dimensions give the instrument its wide range, which is comparable with the Baroque instrument's range of 2½ octaves. The Ganassi recorder was never meant to be a replica of a museum piece. I think of it as a contemporary instrument inspired by the possibilities of Ganassi's intriguing treatise which shows how to improvise (‘make divisions'), lists various fingerings, and also mentions the use of dynamics on a recorder type instrument.

The lyra is a short necked bowed lute, related to the violin. It is played upright, resting on or between the knees, with the strings stopped from the side with the fingernails. One of Kelly Thomas' bows has bells attached that jingle rhythmically as she plays. She uses this bow in the fourth set of pieces. Ross Daly has developed a lyra with sympathetic strings attached, which creates a uniquely resonant and rounded sound.

The lavta is a long necked plucked lute with frets and a round belly. It is known as an instrument that preceded the oud in Ottoman urban music. The tombak is a goblet shaped hand drum, made from a single piece of carved wood, usually mulberry, typically with goat skin stretched over the top. It is the principal percussion instrument in Persian classical music, and is sometimes also referred to as the zarb.

Recorded with assistance from Arts Victoria.

Racheal Cogan
Sojourn
4 stars (hot stuff)
Anyone obliged to play the recorder in school probably has a horror of them. But set those prejudices to one side and let the beauty of this instrument entrance you. Sydney's Racheal Cogan plays music from Greece, Macedonia, Bulgaria and Turkey, plus some medieval Italian pieces. Her sound exudes joy as effectively as it realises a deep sadness. Her playing of two recorders simultaneously is more than a party trick.
John Shand