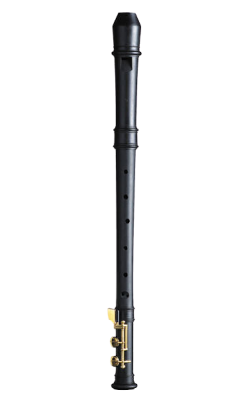 E-foot: The lengthening of the foot joint and the additional key also result in adding a semitone, e1, to the low register and opens up a host of additional alternative and trill fingerings. Range: e'-es'''', A' = 442 Hz.

Choose the voicing of your Modern Alto - "Voicing" means fine tuning of block and windway, the process by which the recorder maker makes basic decisions about the sound and purpose of the instrument.
Baroque Voicing - Baroque Sound. Full, round and distinguished sound, assertive even in combination with modern orchestral instruments. A range of 2 1/2 octaves with easy response.

Modern Voicing - Modern Sound. Strong, assertive and unmistakable - a sound full of character. A range of almost 3 octaves! Even, easy response and a clear and brilliant sound right into the highest register.

Harmonic recorders - The collaboration between recorder player Nik Tarasov and maker Joachim Paetzold resulted in 1996 in the development of the Modern Alto. It is the first modern recorder that follows the principle of Harmonic recorders with pure harmonics and a long bore: overblowing the first octave will produce clear in-tune harmonics whereas in traditional recorders the resulting sounds are not in tune and can at best be used as trill or alternative fingerings. Unimportant as it may at first seem, the ability to produce in-tune harmonics has far reaching consequences for the entire instrument - an incredibly strong and powerful low register and a range extending well into the third octave!