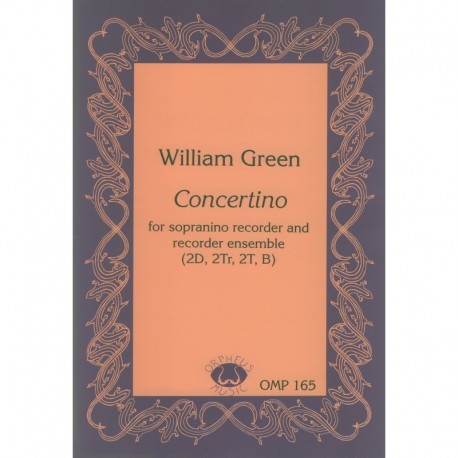 *Contemporary Pieces.* Interesting and varied concertino for large ensemble. Some use of glissandi.

This is a very entertaining piece that will make a striking effect in performance. The edition's brief end note describes Green as a New Zealander who has written music for piano, for orchestra, and for the theater. The Concertino certainly shows a great deal of dramatic flair.

The work is in three movements: fast, slow, fast. The outer movements have a jazzy, syncopated feel in the accompanying group while the solo sopranino plays an even more active rhythmic role.

The slow movement, which Green has also arranged for sopranino and strings, gives the soloist a freely moving line over shifting chords. There are many detailed dynamics marked, but an experienced ensemble will be able to successfully render the required effects.

There are a couple of extended techniques required, glissandi and tremoli, but the piece should be well within the abilities of an upper intermediate ensemble willing to put in sufficient practice time. Even the solo part should be relatively manageable, since much of the focus is on the long, free solo cadenzas in each movement. The writing is idiomatic throughout, and the music will have quite a professional - sounding effect.

The edition is generally accurate and easy to read, although there are misplaced expression markings in some of the parts, and the notation of some of the more chromatic passages seems a little more complex than necessary.

Even though the entire piece only lasts about six or seven minutes, it will bring great pleasure to performers and listeners alike. Green writes well for the recorder, and perhaps he will consider composing a more extended large ensemble work.