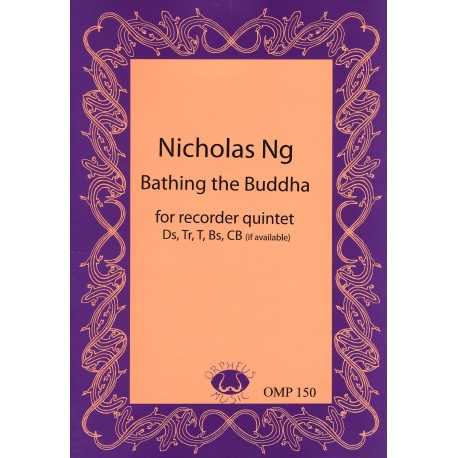 *Contemporary Piece. Mystical piece with oriental influences and some interesting timbral variety. Some changing of recorders.

Bathing the Buddha, by Canberra composer and ethnomusicologist Nicholas Ng, was the winner of the 2005 Orpheus Composition Contest. Ng deserves the award for his success in using non-Western melody and harmony to fashion an adventuresome but approachable piece of recorder music.

Perhaps the most striking aspect of Bathing the Buddha is the use of unusually strong contrasts. The first, freely written section of the piece features quick-note figures interspersed among long held notes. The second section introduces a sustained melody with more regular rhythms, but still a great number of grace notes and slides.

The third section picks up the pace in an irregular 3+3+2 meter. Here the energy comes principally from the driving rhythms and the interplay among the instruments. The final section returns to a more flowing character, combining elements from the two opening sections. An exotic effect is also achieved by contrasting open-sounding fourths and fifths with warmer triadic harmonies spiced with gentle dissonances.

The piece would be approachable for an upper intermediate group willing to put plenty of practice time, but it would be most comfortable for an advanced ensemble in extended techniques. Ng asks for glissandi, pitch bends, multiphonics, rhythmic breathing and tongue clicks in addition to the more traditional ensemble challenges.

The various recorder sizes are used carefully as part of the piece's construction. The opening section is for four sopranos, after which an (optional) low F bass joins the SATB ensemble. It principally doubles the normal bass, but Ng asks for it to be positioned at a distance so as to give it stereophonic role in the concluding section.

The edition is easy to read and is generally quite easy to read. Bathing the Buddha would admirably suit an open-minded ensemble looking for a rewarding challenge as well as a striking and accessible recital piece.