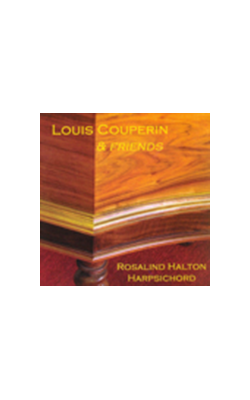 Keyboard music from the French Baroque

"I can only say that one need hear no other player, for the beautiful airs and harmonies mixed together - the beauty of his movements and touch, the lightness and speed united to a most refined ear." The harpsichordist being described is Jacques Champion de Chambonnières, the writer Marin Mersenne, the year 1636.

In 1641 Chambonnières founded in Paris L'Assemblée des honnestes curieux, a group employed twice weekly from that year, making up one of the first concert series in European musical life. The aristocrat musician at the peak of his fame could not have predicted his fall from the favour of Louis XIV, driving him to seek employment outside of France to avoid the "low and wicked" machinations of court life. In happier days, Chambonnières was engaged to choose a harpsichord for the King, and danced with Louis XIV and Lully.

One of the musicians invited by the Sun King to supplant Chambonnières was Louis Couperin, who declined. It was Chambonnières who had discovered the Couperin family and invited Louis to Paris in the early 1650s, thus beginning the family's century-long ascendancy as keyboardists in the French capital.

Much has been made of the contrasting styles of Chambonnières and Louis Couperin, based on a famous letter of M. Le Gallois dated 1680, lamenting - already - the decline of "true taste" in harpsichord playing in favour of empty virtuosity. A supporter of Chambonnières' style, he mentions the aristocrat's "flowing playing, delicacy of hand, and natural, tender melodies .. adorned with ever fresh ornaments". On the other hand, Couperin was admired for the originality of his compositions, "enriched with beautiful dissonances, structure and imitative counterpoint".

According to Le Gallois, it was Chambonnières who "touched the heart" while Louis Couperin "touched the ear". But we may imagine the two musicians as colleagues who respected each other's work. In the Bauyn Manuscript (c.1660, Bibliothèque Nationale, Paris), a volume is dedicated to each of them.

Chambonnières lived to see his harpsichord suites (Ordres) into print, with two volumes in 1670: but Couperin's early death at the age of about 36 robbed him of this opportunity, so the Bauyn Ms. remains the essential source of his keyboard pieces, particularly of his Préludes non mésurées (unmeasured Preludes).

Using a notation style in which every note is shown as a semibreve, Couperin revelled in dissonant and often paradoxical harmonies in the Preludes, establishing a style that explores the full expressive range and sonorities of the 17thcentury French harpsichord. The essence of this style, derived from French lute preludes, is a polyphony unfolding in non-simultaneous layers, interpreted according to the performer's response to melodic gesture and harmonic event.

Francois Couperin, from the 5th Ordre