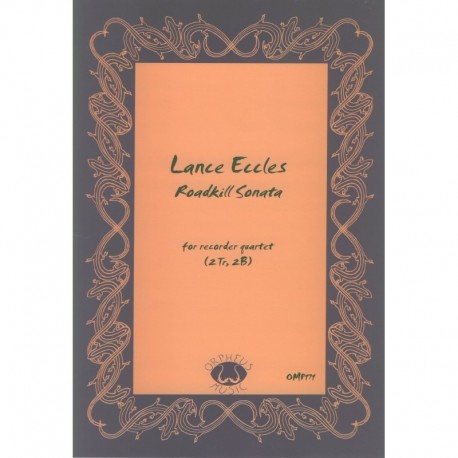 *Contemporary Pieces* in 3 movements. Fun and lively set of character pieces with some chromaticism.

A sonata dedicated to roadkill surely must be a first. I'm not quite sure where one could perform a piece with this title. If I had heard this music (which is quite nice) with no programmatic titles, I would never have come up with negative images of roadkill!

The first piece, "Wallaby," has a very disjunct, contemporary melodic line. The listener needs to have a taste for an eclectic, "far out" melody that skips all over. Due to its many melodic skips, this piece is, like Goldilocks (see OMP178), one of the more difficult selections. It requires, at the minimum, an advanced intermediate player.

"Echidna," the second, is just wonderful, my opinion - gorgeously contemporary and, unlike the first piece, mostly stepwise. Its lines gently rise and fall in and out of dissonance. The voiceleading shifts on almost every half-beat, and assembling all the parts creates a breathtakingly lovely whole.

Near the end, a more difficult motive involving 16th-note descending sevenths is quite challenging - not only to play the notes, but to achieve a tight ensemble. We all thought it was a shame to have such a lovely contemporary piece clothed in a "roadkill" connotation.

The third piece, "Alsatian (Auto Chaser)," returns to the disjunct melodic style of the first piece. It is altogether a nice piece, but the listener and the performer must have a taste for the more adventurous contemporary harmonies.

3 other products in the same category: