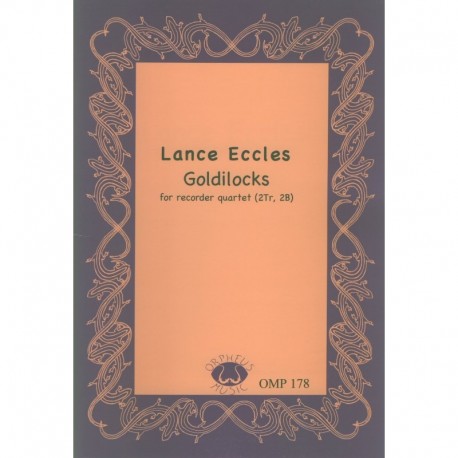 1. Through the Forest to the Bears~~~~~ House
2. A Short Sleep, with Bad Dreams
3. Discovery, Struggle, Escape

Goldilocks is another work that is more difficult, requiring advanced intermediate players. "Through the Forest to the Bears' House" contains dissonant harmony. It does paint a good picture of Goldilocks skipping through the woods. The melodic materials skip from instrument to instrument, sometimes in dense stretto. It is very contrapuntal, except for a section where the top three parts come together in parallel rhythm.

"A Short Sleep, with Bad Dreams" sounds much like its title, opening with a very eerie atmosphere of dissonant slurs between the two bass recorders. Interesting syncopated passages pass between the voices, and there is a lively 16th-note section for bass recorder.

The final "Discovery, Struggle, Escape" is loosely in ABABA form. Its A sections feature a bouncy melody in the top alto part. Later, the second alto part plays an inversion of that melody. There are full measures of parallel seconds between adjacent voices and measures of tone clusters among all four voices. The B sections, predominately in 5/8 (with some internal meter changes), build momentum before returning to the A section's melody.

Of the Eccles compositions I have studied thus far, this is the one where I feel the music most fits the mood of the titles. Players will need to be able to play skips of ninths and twelfths, plus heavily chromatic lines.