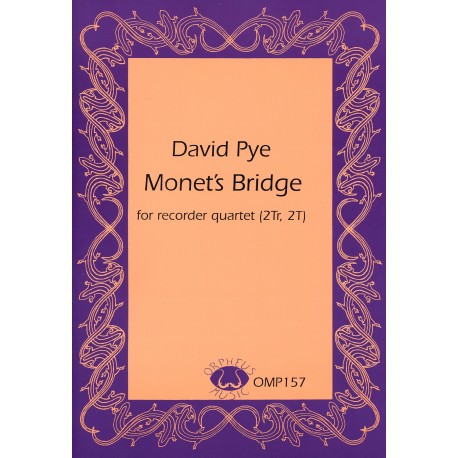 French Impressionist Claude Monet's painting of the Japanese bridge at Giverny was the inspiration for this quartet by Australian composer David Pye, a percussionist, conductor and composer who is particularly drawn to dance and theatre music. He is keenly interested in the music of India and Western Java. At the time of this writing, Monet's Bridge, which won the 2005 National Recorder Composition Competition (Australia), was Pye's only work in the Orpheus catalog.

After a brief set of flourishes, the quartet embarks on a mesmerizing interplay of motives whose rhythms bring to mind Eskimo throat-singing. An ever-present En adds to the hypnotic effect. Double-tonguing, fluttertonguing, overblowing and pitchbending are required in all parts.

Pye notes the affect of the Japanese end-blown bamboo flute, the shakuhachi. The allusion is perhaps to the pitch-bending technique integral to its music. Although shakuhachi repertoire is pentatonic, such scales are not a feature of this piece.

The composer writes that another source of inspiration was Percy Grainger's Immovable Doh, in which a given pitch is sustained throughout. Henry Purcell experimented with this technique masterfully in his Fantazia in F Upon One Note for four viols. More recently, Elliott Carter, inspired by Purcell, also composed static-pitch pieces (e.g., "Etude No. 7" from Eight Etudes and a Fantasy for woodwind quartet, composed in 1949).

As the piece concludes, the rhythmic density, pitch range and tempo diminish gradually. The duration is about five-and-a-half minutes.

The four parts are equally important, and playing is more or less continuous in each. Technically, the piece is moderately challenging. The opening bars are a bit tricky to coordinate; a reading with the score is advised.

Life recording from a concert, performed by The Recorder Co-op (Melbourne, Australia),  in March 2020.

Orpheus Music would like to thank The Recorder Co-op for generously sharing their recordings with us.