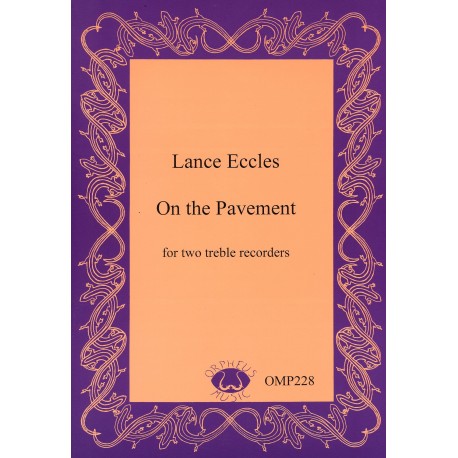 On the Pavement contains four mildly contemporary duets; the two altos are active in all four of them. The duets use contemporary idioms, but they are not extraordinarily dissonant.

In the lively first piece, “Pigeons” the two alto recorders, when heard together, sound like a perpetual motion. There is a total of five quarter rests in the score, never in both parts simultaneously. This piece has no key signature, starting and ending in C major, but it travels freely into other keys areas without any key signature changes; know your accidentals!

It is printed without any articulation guidelines, but we experimented with various articulations other than straight single and double tonguing- particularly slurring a figure that dips to the lower neighbour tone and back (there are lots of these in both parts).

The Top part has mild scale and arpeggio work, but the bottom part doesn’t -it is my opinion that the bottom part is significantly easier to play. The piece as a whole reflects its title: the constant motion of pigeons when they mingle with people, hoping for a handout.

The second piece, “Leaves” is a lyrical one-page Andante in G minor. There are some lovely descending whole-tone scales played simultaneously in both recorder parts, a major third apart, quite a musical picture of falling leaves. The top part has one two-octave jump between fourth-leger-line G and G on the second line on the staff.

The third piece, also only one page long, is called “Wind”. If you plan to play this, start practicing chromatic scales now. The runs are mostly chromatic with a whole step here and there, to keep you awake. Near the end, there is a striking passage of tritones- in the top part, then passed to the lower part. Another characteristic motive of this piece is the ascending minor seventh.

The final piece, called “Rain” is more of a playful rhythmic showpiece; it uses much less chromaticism than the first three pieces, As in “Wind”, “Rain” also has a section of tritones rhythmically interwoven in to the two parts. As the title might imply, this piece also suggests perpetual motion when the parts are combined.

On the Pavement is definitely a set for advanced intermediates. We enjoyed these Eccles works and found them to be delightfully contemporary, but much less dissonant than some of this other works that we have played.

Shannon Groskreutz began recorder as a young child and attended the children’s program at Indiana University. She is a Lecturer in Music Theory at Stetson University, and is also coordinator of select music theory and aural training courses. A PhD. candidate in Music Theory at Florida State University, she was also a teaching assistant and fulfilled the requirements for FSU’s college Teaching Certificate, to be awarded with her PhD.