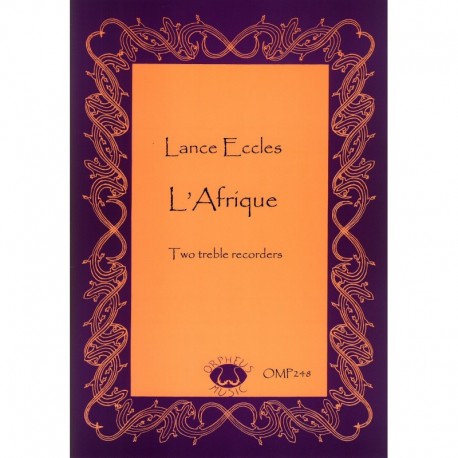 This collection of four contemporary pieces for recorder reflect Lance Eccles's propensity for program music. Intended to represent African animals, they are titled Meerkats," "Springboks," "Ibises" and "Queleas." Tempo markings for three of the four are Fast or Fairly Fast, while "Ibises" is designated Peacefully. The speed, complicated chromaticisms, tricky meters and occasional convoluted rhythms offer quite a challenge to the experienced player definitely in the upper intermediate or advanced category.
These pieces are stylistically modern. Though tonal, dissonance is fundamental to their character. They exploit the alto recorder's upper register -and, while they do descend into the lower range, the chromatic notes tend to be concentrated in the higher pitches.

The opening piece, "Meerkats," begins in 11/8 time. After several measures it migrates to 4/4 and then to 9/8, 3/8, 7/8 and 2/4, periodically returning to 11/8 and 4/4. No metrical equivalences are given, but eighth-note equivalence is really the only performance option. Once one gets that the underlying premise is a quick shift (sometimes within a measure) between triple and duple meters, it becomes considerably easier to hold on to the eighth note pulse at a fast tempo. I must admit it took us, two experienced players, quite a bit of practice to achieve staying together while playing up to tempo.
The situation is further complicated by rapid shifts between sharps and naturals, and other chromatic additions. Despite all of the above, it is an amazing and fun work--though dissonant, it is not unpleasant to the ear.

"Springboks," the second selection, is considerably more intuitive, with a constant 12/8 meter and only a few excursions into duple figures. Tbises" involves a challenge of a different order. The Alto 1 line is set very high; though the second part is generally lower, it also reaches the top notes of the instrument on occasion. There is a great deal of dissonance, yet the directions indicate that the mood is to be peaceful. To achieve a serene sound requires a skilful command of the high register if one is to produce pure, clear and pleasing top notes.
The fourth piece, "Queleas," is less dissonant than some of the others in the collection. It is marked Fairly Fast and contains offbeat jazzy segments that take some practice. There are also a number of ornamental figures that include unexpected accidentals and rapid execution.

In all four works, the parts are equally appealing. The first alto generally occupies the highest pitch space.
The second alto part extends upward on many occasions, and the voices exchange melodic and rhythmic figures, so that each part is fun to play.
Overall, these songs loosely represent features of the animals they are intended to depict. Each has a unique musical character, and thus the collection is quite varied. The edition consists of a bound
score and a freestanding score. This is a nice feature, as it is much easier to perform music of this complexity from a score rather than parts. It also enables each player to have a practice copy.
This collection is not for the faint of heart. That said, for those who enjoy contemporary idioms and who are not put off by dissonance, high pitches, roller coaster chromatics or tricky rhythms, it offers an exciting and satisfying experience.

Beverly R. Lomer, Ph.D, is an independent scholar and recorder player whose interests include performance from original notations and early women's music. She is the president of the
Palm Beach (FL) Recorder and Early Music Society.