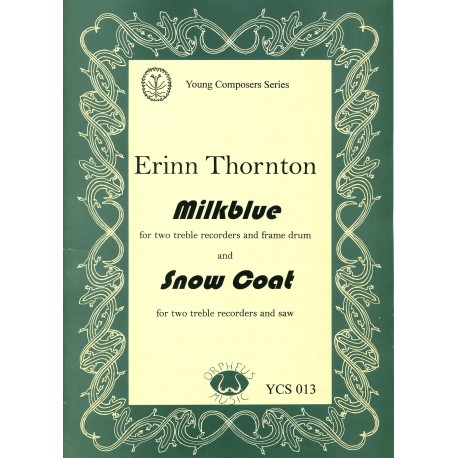 An unusual pair of compositions published by Orpheus Music, under their 'Young Composer Series".  Although scored for interesting combinations, the frame drum/saw lines are not prohibitively difficult and could easily be tackled by a game fellow musician.  The recorder parts are well scored and have an underlying gentleness in their melodic lines, employing a range of standard 'avant garde' techniques such as flutter tonguing, glissandi, quartertones and multiphonics.  There are some accompanying notes, although at times perhaps a little more explanation would make some points clearer.

Both pieces are fairly short so could easily be performed as a pair and the scores are well set out and clearly printed - as we have come to expect from Orpheus Music publications.  However, there are only two scores provided which seems an oversight.

Here are two intriguing pieces by a young Australian recorder player. Both works are slow and meditative in character and make sparing use of extended techniques - most notably multi-phonics, microtones, and glissandi.

In Milkblue, Thornton utilises a frame drum that is filled with lentils (dried peas may be used if lentils are not available!) and is played by a third performer. This percussion part is completely improvised, as is the music for saw (musical or carpenter) in Snow Coat. However, while the frame drum is simply waved around at specific moments, the saw must be bowed and tapped, which requires a certain amount of skill, even though Thornton's notation is unspecific regarding pitch and rhythm.

The relationship between the two recorder parts varies, but most of the time they function in either heterophony (playing somewhat different versions of the same basic material at the same time) or simultaneity (playing unrelated material) the latter with a minimum of control guidelines.

The edition is nicely printed. If the to recorder players read from one score, there will be no problems with page turns.

These pieces can be played by good amateurs, but a teacher who is familiar with the techniques and notations of modern recorder music will be an absolute necessity.