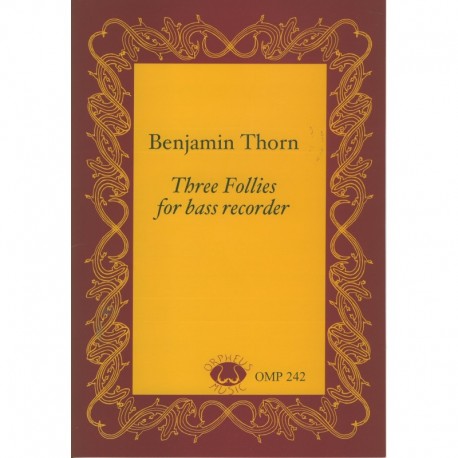 Benjamin Thorn
Three Follies for Bass Recorder
Orpheus Music, OMP 242,
It is good to find a piece of original music for bass recorder which can be played by reasonably competent bass players, without having a diploma tucked under your belt. Benjamin Thorn's Three Follies are structured round the Follia ground bass and could be accompanied by a cello or viol playing that bass in G minor.

The first movement, marked "Lively and spontaneous", is indeed a lively syncopated piece with triplets here and there to add to the spontaneity. By contrast, the second Folly, has the feel of an aria, although it does have a brighter middle section. Parts of this movement are to be sung at the same time as being played. I am not very good at that technique and I didn't think it detracted too much from the movement just to play it straight, although it is not what the composer intended.

The final movement is a lively gigue with some syncopated bars which is quite effective and ends the piece with a flourish.
These pieces were originally composed for ocarina so the range of notes is limited, which works in favour of bass players who are not comfortable in the high register. Three Follies are enjoyable pieces to play and to listen to.
Janice Ormerod , The Recorder Magazine, Summer 2014 p.64