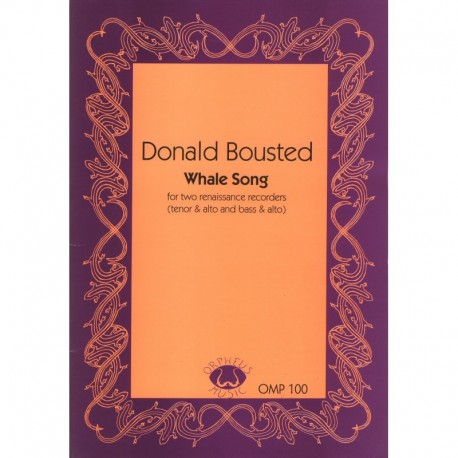 As one might expect, Whale Song by Donald Bousted was premiered by those staunch advocates of microtonal recorder music Kathryn Bennetts and Peter Bowman.  In fact they gave the first performance at York in 1999 in a special version with live electronics.

The work opens with a sort of plainsong-like music on bass and tenor recorders, both players singing in unison with their parts.  This gives way to a section where the lower part plays multiphonics above which there is a driving demisemiquaver rhythm involving many different versions, 1/8 sharp, etc., of the note C.  The roles are then reversed, the tenor having now switched to alto, before this is succeeded by a section of complex rhythmic interweaving where the pitches are heavily microtonal.  A more flowing central section for two altos follows making a feature of quintuplet rhythms.  The piece then repeats some earlier material in reverse order creating an arching structure to the work before a busy final section, which, once again, makes a feature of the bass recorder.

A highly intense work, which will, I'm sure, find favour with those with a penchant for such intricacies.  One potential difficulty for performers may be the choice of renaissance recorders upon which to perform Whale Song.  With so many different styles of instrument on the market, both mass-produced and hand-made, finding appropriate recorders capable of the demands made on them may prove tricky.  Perhaps it is the case that Whale Song was not only written for two particular performers, but for two musicians with the capabilities of their own particular instruments firmly in mind.

Much of the content of this duet consists of rapid staccato notes within a very narrow range, and sustained multiphonics that have off-beat entrance points. The combination of these two elements requires great rhythmic precision and would be difficult to play even without the microtonality. A little blurb printed above the title on the first page of the score informs us that the initial performance of this work was rendered with live electronics. That probably made a big difference in how the music came across