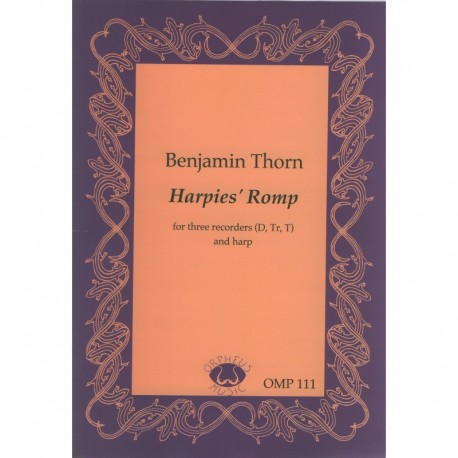 I was interested to come across Benjamin Thorn's Harpies' Romp, written for the Aeolian Players, because, like the composer, I am a "would-be" Celtic harp player. Here, I thought, must be a piece which is sensitive to the needs of the poor harpist, and I was right. The harp part does not require any tuning throughout the piece, which is a boon to the Celtic harpist, even those who have the handy (if inauthentic) semitone levers. I am not sure what the balance of three recorders (SAT) would be like against a concert harp but the possibility is there.

The piece opens with a free introductory passage in 4/4 with imitation between the harp and the recorders. This moves into a fast and rhythmic 6/8 opening subject which is contrasted by a cantabile subject later. Both subjects weave around together before settling back to the first subject for a satisfying conclusion.

The harp part is straightforward or moderately taxing, depending on the skill of the harpist and although I hesitate to say this, could be played on a keyboard in the absence of a harp-playing friend.

I am looking forward to having a go at performing Harpies' Romp sometime soon.

Lucky is the consort that includes a harpist, and I found just a consort in Grand Junction, CO. This group read through Harpies' Romp with me, and their harpist, Amber Benson, collaborated on this review. She described Harpies' Romp as "a delightful, peppy composition, and well named - it is a romp."

Australian composer Benjamin Thorn is well known to readers of our music reviews. He composes idiomatically for recorderists of all levels, from professionals to amateurs. Harpies' Romp is for an intermediate recorder trio who will know well the C minor scale (harmonic form) after practising this piece, if not before!

Each part is fun to play, whether dueting with another part or in combination with the other two recorders. The introduction to the piece, marker "Freely", begins as a dialogue between the harp and the soprano recorder. Then the other recorders join in a few measures before the main section of the piece, which is in a "fast and rhythmic" 6/8.

The harp part can be played by a Celtic harp, lever harp, or concert harp. It complements the recorder trio, romping along in eighth notes with occasional three-voice chords. Benson says that the part is for harpists of intermediate playing level. It has a small range (from the C below middle C to the second G above middle C), so it could easily be played on a lap harp as well as larger harps. Even though the key signature is three flats, only the E string need be flatted - A is never played, and all occurrences of B are made natural. Thus, if one has levers on the harp's E strings, it is easy to change the levers - or, since the part has only a 2 ½ octave range, one need only tune three strings down to E flat. Much of the Romp sounds pretty good with only one hand playing the notes from one staff, so if the harpist is less accomplished and cannot play all the notes up to speed, playing one staff would be possible and even pleasant for listeners,

This fun piece adds a new tone colour to the recorder ensemble repertoire. Let's have more like it!

21 other products in the same category: