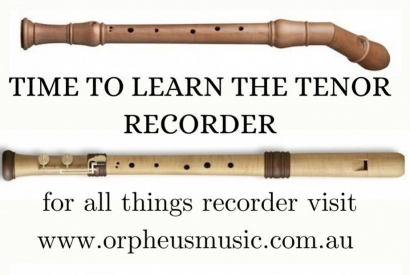 Many players find it difficult to reach all the holes when playing tenor, especially for the smallest 2 fingers of the right hand. There is quite a bit of variation in finger hole position from one maker to another, and from one model to another. If you are worried about the stretch for your fingers or the twist required of your right wrist, this guide will inform you about Knick tenors and comfort tenors that are designed specifically to tackle this common problem.

The chart below was prepared to try and show which models will be easier to play. There are several factors involved: the distance between the holes is important, but another significant factor is whether the recorder is straight or has a bent head ("knick"). Knick tenors allow the right hand to hold the recorder in a higher position than with a straight instrument - the right hand is not stretching down so far and consequently a spacing that may actually be a little wider will still feel easier to reach on a knick instrument.

Players that have problems with their right-hand wrist should strongly consider knick instruments. Often a player will have specific issues with one or two fingers. If this is the case, then you may need to focus more on comparing the measurements for the holes played by the problem fingers. In such cases the general ranking provided here might not be so relevant for your special circumstances. In this chart the weights shown are a guide only - weight can vary within a particular model depending on which wood has been used.

Comfort tenors are ergonomically designed and have an easy to operate key mechanism. This  relieves the little finger of any strain when playing the lowest notes. 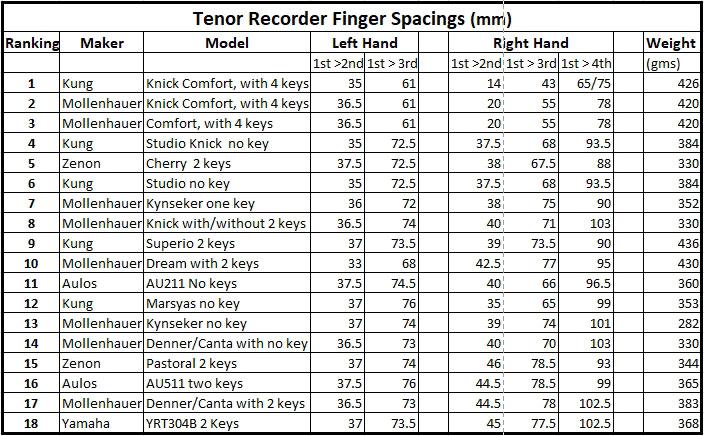 Left: a knick tenor with a knick in the neck to bring the recorder closer to body while playing - no keys.   Middle: a normal tenor recorder.  Right:  a comfort tenor with keys for smaller handspans.

So if you have small hands, and short arms or any wrist injuries, suffer arthritis, we’d recommend a knick tenor. The knick allows the recorder to be closer to your body and allow for the weight of the instrument to be evenly distributed. The keys on the holes feel as though you are playing the treble recorder.

If you have large hands and long arms a normal tenor will suit you perfectly.

Once you have decided on the model you would like, then the fun begins! There is a large range of tenor recorders made in a beautiful range of woods including pear, plum, satinwood, olive, rose, palisander, grenadilla, boxwood and cherrywood. Orpheus Music stocks tenor recorders from a variety of makers including Mollenhauer Recorders from Germany, Kung Recorders from Switzerland and Aulos, Yamaha and Zen-on Recorders from Japan. The tenor is a great ensemble instrument as well as a favoured recorder for contemporary compositions.

It's important to take your time in choosing the right tenor recorder for you and your body so that you can play for as many hours as you like with no potential of developing pain. The tenor is the ideal instrument for anyone who already plays the soprano recorder but loves a warmer, deeper recorder sound. You don’t have to relearn anything: the fingerings and notation are identical to that of the soprano recorder.

This guide was written by Peter Biffin & Alexandra Joly.