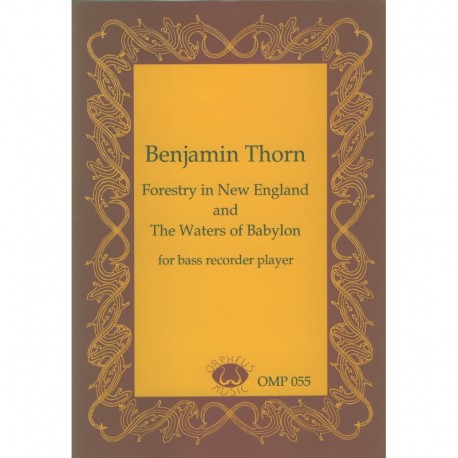 *Contemporary Pieces.* A boisterous and attractive piece in three movements that uses multiphonics and voice and a haunting melodic piece.

4. The Waters of Babylon

Benjamin Thorn has been rushing into print with startling frequency in the last few years, and has adopted the bass recorder as something of a pet instrument.  These two pieces are interesting and accessible works for unaccompanied bass and add considerably to the limited repertoire of playable solo works for it.

Forestry in New England is undoubtedly the more interesting of the two; a quite substantial work in three movements, covering the entire range of the bass recorder and making considerable use of the extreme high register.  This is one of the areas that may provide difficulty for the average bass instrument, too many of which suffer from weak top e and f, both of which this work requires regularly.

The first movement, marked "Freely", is an elegiac roam from the lowest to the highest registers, with much use of paired semiquavers, and gives scope for the creation of some lengthy shapes and lines.  The second movement, "Fast and Rhythmic", is a jaunty thing in 7/8. This reviewer feels that the notation of multiphonics, using a diamond notehead with a harmonic symbol, is un-necessarily unclear; the harmonic symbol is not needed at all, a different notehead sufficing.  That said, the multiphonics employed are exclusively based on an existing note with one ort two extra fingers added.  This is straightforward and clear and creates an environment wherein multiphonics are used more as an extension of the instrumental timbre than as a harmonic or 'avant garde" feature.  The final movement, "Lively", makes use of Thorn's other pet compositional feature; vocalisation while playing.  This is a feature that commends this music more to male players than to female, as Thorn suggests that the "voice part should be a throaty grunt except where it is independent of the recorder part."  Both parts are notated in the bass clef throughout.  This movement is the weakest of the three, the melodic material being somewhat forced in its liveliness, and the triadic harmonic progressions implied but the figuration being, in many cases, rather uncomfortable.

The Waters of Babylon is added to this publication as something of an afterthought.  It is a short, 35 bar, completely conventional melodic piece marked "Cantabile" and making no special demands on the player other than the regular use of the high register of the bass recorder.  However, there is a simplicity of melodic line here that suggests careful craftsmanship and an intimate knowledge of what is effective on the bass instrument.  It is easy to imagine this piece played as an "unexpected" encore to a virtuoso recital, and it would be captivating.

Benjamin Thorn's early bass recorder works, The Voice of the Crocodile and Pipistrelli Gialli established him as an Australian enfant terrible and may even have secured his place in the modern history of the recorder. These recent bass recorder compositions by Thorn are of a much lighter character.

Misery surrounds me subtitled "instrumental versions of a 15th-century popular song arranged for bass recorder," is based on a song called "Elend, du hast umfangen mich".  It is essentially a division piece in which Thorn employs a simple tonal language with a modern tongue-in-cheek sensibility.  It is not easy to parody something that is formulaic and predictable but Thorn manages it well with great subtlety.

Forestry in New England is also a parody. This is at least evident in the free recitativo-like opening movement. The second movement, in a fast 7/8 meter has a dynamism reminiscent of Thorn's earlier work. It is most humorous in its raucous use of multi-phonics as a distorting device. In the third movement, Thorn employs silly, old-fashioned melodic clichés from the ragtime era which he makes even more comical by having the player sing them into the recorder whenever they appear.

The Waters of Babylon, included in the edition with Forestry, expresses parody by combining simple melodic phrases that would generally be idiomatic to folk songs, with an ongoing through-compositional form. Also a bit unusual is the frequent shifting between Dorian and Locrian modalities which strikes the ear as a kind of wrong-note version of the melodic minor.

The editions are excellent and contain no bad page turns.  Ample instructions for the second movement of Forestry (the only place where special effects are required) are supplied.  Upper intermediate players could handle these pieces.