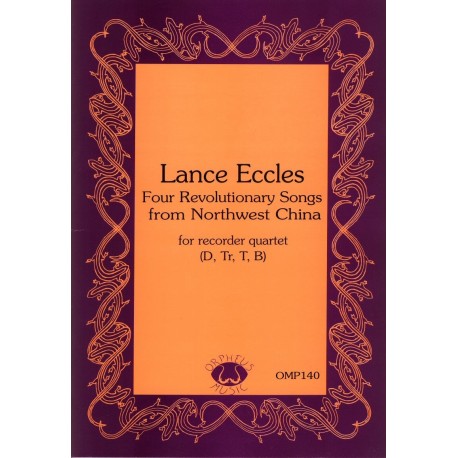 No.1: "Three Rules of Discipline and Eight Points for Attention", is much brighter than it may sound. In two flats and marked to be played 'briskly' it has very few rests and berates one with joyous fervour in a simple hexatonic music from the beginning to end. The opening eight-bar tune given out in octaves gets two more, harmonised repetitions before some discussion ensues, wound up with a forceful assertion of the two opening bars.

No.2: "Red Bloom the Mountain Lilies", with one sharp for signature, and its czardas-like alternation of slow and fast, is a gentle contrast to the preceding. The descant, which had soloed to begin with, sits out in the third repetition of the tune, to re-appear vigorously with top D's and all in the fast section.

No.3: "Embroidering Words of Gold", has no key signature and is made from the simplest of materials. The descant again sits out the third verse of the six of its sixteen-bar melody.

No.4 Army and People together, is fast with lots of lively articulation and presents its tune nine times over, with different configurations for each, including the now mandatory retiring of the descant for verse three. Without a dynamic in sight, Lance Eccles, of whose oeuvre thirty-two examples are described in the advertisement at the back, has contrived to dragoon his quartet into some exciting manoeuvres with distinctive harmonies, full use if the recorders' ranges and very little let-up.