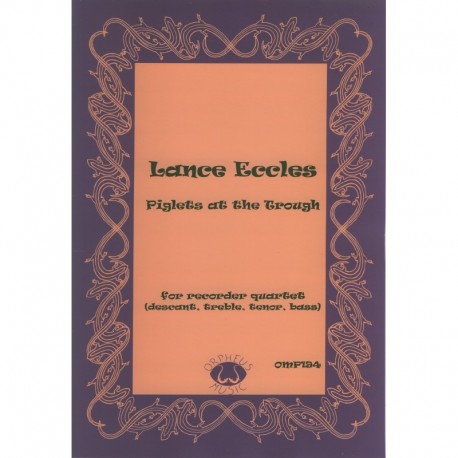 The sight of music in the distinctive purple and orange covers can only mean one thing, more original music from the Australian Orpheus Music Publications, whose two main resident composers are Lance Eccles and Benjamin Thorn. In this latest clutch of quartets, there are three by Eccles and one by Thorn, each with the quirky titles we have come to expect. Piglets at the Trough might not appeal to the vegetarians amongst us, especially with the final movement entitled 'An outing to the sausage
factory'! The music is in true Lance Eccles' style; challenging, both rhythmically and chromatically. The first movement, The Joyful Awakening', starts freely as if stretching and waking up and then launches into a simple carefree melody which is passed between the parts, undergoing modulation and a few rhythmic changes before returning to the home key. Next, in Breakfast at the Trough', the piglets are obviously keen to get the food, as the movement is a short, fast moving piece in 3/8 time, again with some challenging accidentals. Finally, in 'An Outing to the Sausage Factory', the piglets dance along unaware of their fate, until after a molto rit, a solemn section is reached which has a hymn-like quality. After a short tacet bar, the melody skips away again, so perhaps the piglets escape after all.