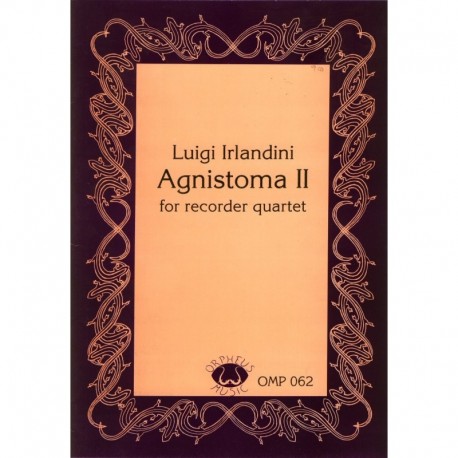 Luigi Irlandini was born in 1958 and studied in Brazil, Italy with Franco Donatoni, and USA with Brian Ferneyhough.  Of Agnistoma II the composer says that it "is a polyphonic elaboration of the rhythmic-melodic materials in Agnistoma I, a piece for voice, two soprano recorders, and didjeridu, on a hymn from the Rig Veda, and sung in Sanskrit".

The title, Agnistoma, means "in praise of fire", and the pyrotechnics get underway from the outset with a tapestry of triplet quavers woven together which, subsequently, develop into quintuplets.  The texture is densely packed with all four voices almost continuously busy.  Moments of repose occur when the players, originally required to play two altos and two tenors, are asked to change instruments, expanding the range from sopranino to great bass for a calm central section.  Music similar in style to the opening signals the final section of this intense and difficult work.

Aficionados of contemporary music will enjoy studying Agnistoma II, whilst I, for one, eagerly await experiencing this particular piece, either as a performer or listener, when the blue touch paper is lit on the concert stage.