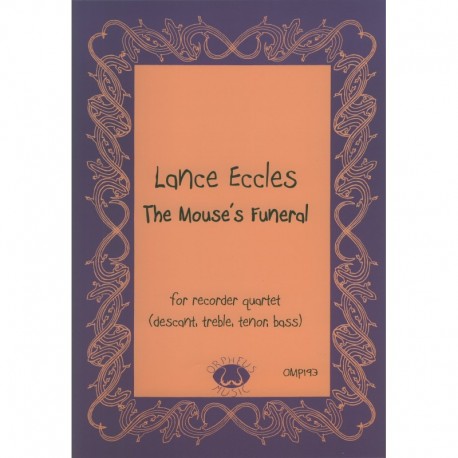 *Contemporary Pieces.* Nicely ironic set of pieces with some pleasant close harmony and a lively dance at the wake.

I liked the pieces in The Mouse's Funeral so much that, for me, the title is something of a distraction from the music. The first piece, "In the Church," begins with a section of dissonant chords imitating bells, followed by a consonant couple of measures imitating an organ. Next appears a chorale-type hymn - nicely arranged, with well-balanced movement in all the voices.

A striking section of the piece is entitled "liturgy." Here there is constant movement - at least one voice on every eighth note, sometimes just by syncopating one of the parts. The piece ends in a re-arranged setting of the hymn.

The somber second piece, "At the Graveside," is a short 34-measure piece with the performance direction, "slow and sighing." It features sharp, accented skips into dissonances - D against D, G with G. The mood is certainly appropriate for the graveside.

"At the Wake" starts out sounding more Classical than contemporary - but not for long. By measure three, we hear cross relations (B against B). This piece is very playfully active, with the most fun in the soprano part.

Eccles uses some of his signature phrase modulations, the first going from G Major to C minor. In some measures, all parts come together for a dissonant, syncopated moment. This is, altogether, a fun piece to play - a piece with a celebratory atmosphere.


The Mouse's Funeral is also a programme piece in the three movements In the Church' opens with a very effective tolling of bells, followed by the organ softly playing, and leads into the first hymn. Next follows a chant in organum which introduces the Liturgy which is also interspersed with chants. A Eulogy follows and the final hymn finishes the movement. The instructions for 'Bell, organ, hymn' etc are printed on the score and on the descant part only, but it is a pity that they weren't reproduced on the other parts so that these players could enter into the mood of the piece as well. I am sure I heard a reference to Three Blind Mice' incorporated into the sighing of the mourners. The final movement, At the Wake', is a jovial piece which travels through several modulations and gathers rhythmic complexity as the mourners get more intoxicated. There are plenty of challenges in The Mouse's Funeral' to keep players on their toes.