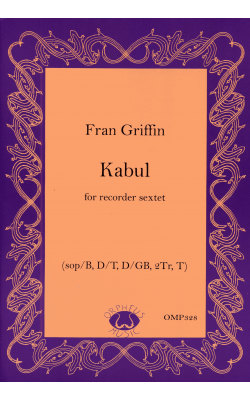 This composition was part of Orpheus Music Composition Competition 2021.

to flee your home country in fear of your life;

to leave behind family and friends,

the work that defines you,

the home that comforts you;

to be an educated women burning her qualification certificates;

to be a teenage girl deemed old enough for marriage to a stranger;

to be a musician whose voice has been silenced and whose instrument has been destroyed;

to be at risk of arrest for having publicly expressed views supporting equality, freedom, compassion, respect, tolerance, justice?

What maniacal misinterpretation of religious texts can be used to justify violence, killing and outright cruelty to innocent citizens, and to glorify those who inflict it, as the Taliban has done?

Fran Griffin began life as a flute player, studying at the Sydney Conservatorium of Music, Australia, with renowned teachers Margaret Crawford and Michael Scott. Although composing since the age of seven, she put aside composition in favour of an interest in early music performance practice, studying baroque fute and recorder with Howard Oberg. After a number of years working as a freelance musician, she returned to study, completing M.Sc. (Hons) in mathematics at Macquarie University, Sydney in 1999. Here she remained on staff until 2012, when she left Sydney to live in country NSW. Here she has renewed her previous life as a musician, teaching flute, clarinet and bassoon and performing once again with early music ensemble Nouvelles Réfexions and flute quartet Eclectix.

Fran has renewed here interest in composition, finding a need to produce many arrangements and original works for students and for community concert bands and choir. Her more serious compositions include arrangements and new works for flute quartet, flute duo, and other chamber combinations with flute, bassoon duo, clarinet ensemble, string trio, symphonic winds, and choral works. She has received several awards for composition, and her works have been published in Portugal, Italy, Belgium, USA and Australia.

21 other products in the same category: