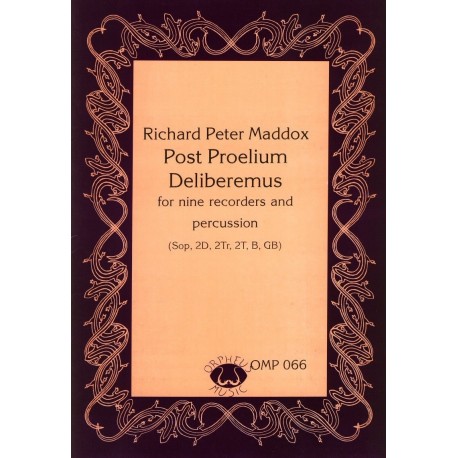 This is most definitely the piece for every advanced recorder ensemble with an inspiring virtuoso sopranino player!

Although entitled "for 9 recorders and percussion" this piece could really be described as an octet with percussion plus solo sopranino line - most definitely not for the faint hearted. The sopranino line would take a very competent player with secure technique to produce a convincing performance.  Prepare yourself for semiquavers in A Major at crotchet =132 - not everybody's cup of tea.

The rest of the ensemble themselves are taxed in different ways.  Ranging from divisi descant/treble/tenor to bass and great bass, the extended recorder family is taken through its paces and ensemble skills are tested.

Following a short Prelude entitled "Chaos" ("Each instrument in independent free rhythm"), the main body of the 1st movement, "Triumph" opens in a jaunty 10/8 time signature (3+2+2+3) which in itself poses ensemble problems.  The 2nd movement, entitled "Deliberato" requires excellent tuning and rhythmic skills from all whilst supporting a haunting sopranino line above, whilst the 3rd movement, entitled "Laetitia", again provides some rhythmic complexity as well as frequent chromatic movement through keys.

A demanding piece which will require some preparation by the sopranino player and will hopefully provide many weeks of concentrated rehearsal time - enjoy it!

Latin passed me by at school but a Latin/English web site helped me ascertain that Post Prolelium Deliberemus is something to do with a battle (there is no programme note, which would have been useful).  There is an opening section of Chaos, where the instruments have to play in free rhythm (the battle?), followed quickly by a Triumphus (hurrah, we've won the battle?); the second movement is marked Deliberatio (let's reflect seriously on what has been won?) and the third Laetitia (let's party?).  The approach is more adventurous technically than in Deep Sea Perspectives although I don't always find the musical style convincing; in the first movement especially the sections follow each other awkwardly and the central, pseudo-fugue seems contrived.  The last movement will be fun, however; the syncopated rhythms provide a good test of ensemble and the soprano part, dashing about at high speed in a series of scalic and arpeggiated interjections, offers a virtuosic challenge to the would-be soloist.  This is clearly the harder of the two pieces and would need a willing and dedicated ensemble to do it justice.

Both pieces provide good, and much needed, ensemble material for young players but, of the two, Thorn's Deep Sea Perspectives will prove most musically satisfying to both players and audience.

...Richard Peter Maddox's, Post Proelium Deliberemus (deliberations after the battle)... mixes modern day aleatoric procedures and minimalism with aspects of Baroque form and style, using a conservative tonal language.  Though he employs a wide range of recorders, most of the activity occurs in the upper parts, with the sopranino taking a concertant role.

9 other products in the same category: