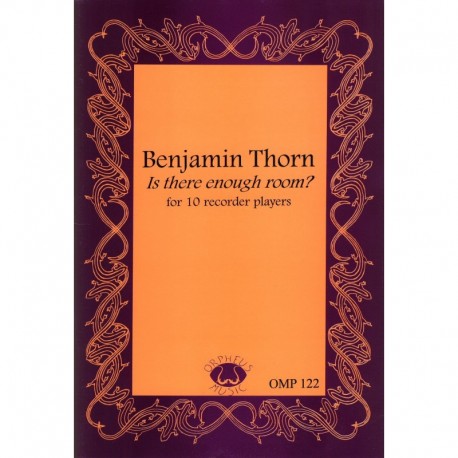 Is there enough room?

1. Is There Enough Room?

Wow, what a fun piece! While Six Folksongs [OMP110] is suited for just sitting down and playing on the spot, Is there enough room? Will only offer its rewards after real practice. Suited for upper intermediate and advanced players, it is challenging without really being virtuosic. Most notes are quarters or eighths, with just a few 16ths.

Counting is the biggest challenge, and also the most fun. The time signature is 7/8 throughout. Beaming of notes makes the patterns clear, usually 2+2+3. A conductor will be required, plus a suitable performance space.

The performance notes state that the 10 players should line up in numerical order across the stage, with as much space between them as possible. The title of the piece refers to this use of space. The piece begins with the polychoral stereo effect pioneered during the Renaissance in the Venetian church of San Marco. Later, musical effects travel in waves from player to player, creating a sensual treat for the audience.

Only two modern techniques are employed, and both are easy to learn. For example, on an alto, play a low B or B flat and blow a bit too hard. Voila! You are already playing multiphonics (two tones at once). The second technique is "twittering, rapidly moving fingers and tongue at random".

The score and parts are clear and easy to read, as are also the editor's notes.

This will take some individual "wood-shedding" at home, plus ensemble rehearsal time, but it seems perfect for an adventurous group looking for a challenge.

9 other products in the same category: