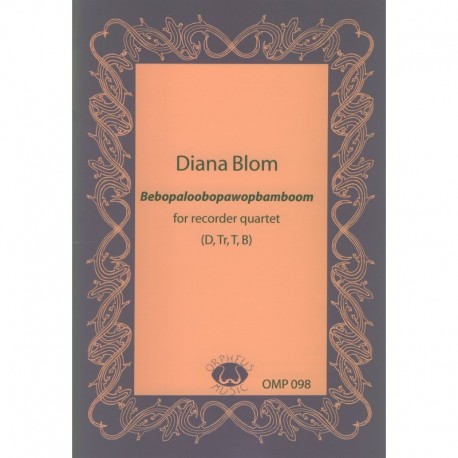 *Contemporary Piece.* Lively and funky quartet. Great fun with some opportunity for improvisation.

Diana Blom works in Sydney, Australia, in a school of contemporary arts, and her new piece has a slow gentle swing with jazzy rhythms.  Some groups will find this very difficult, particularly treble players, who are expected to produce a high A over four ledger lines above the stave on many occasions towards the end.  Various passages for all players call for improvisations on groups of six or seven notes that are shown as sequences of semibreves, usually unaccompanied.  It would have been better if something more explicit and suggestive has been given in the core at these points.

It is amusing to note that the tenor and bass parts have the final say.  Tenors are invited to click their fingers for several bars, and basses can, if they please, sing "doo" or "boo" as they play.  I'm sure they will!

Australian composer Diana Blom's Bebopaloobopawopbamboom is a catchy number that general audiences will surely like, and is typical of a certain kind of recorder work that is not real jazz, but "jazz-influenced".  Its simple ABA form is based on compositional ideas rather than on a chord progression.  The A sections feature a funky ostinato bass line with attractive riff figures simultaneously overlaid upon it.  The B section is homophonic, but also features measure-long improvised solo breaks for each instrument.  For these, Blom supplies both gamut and ordering of pitches so that the only thing the player has to make up is rhythm.

The beginning and end are delightful.  The composition is least successful in the homophonic section, where Blom's block chords are not sonorously attractive.