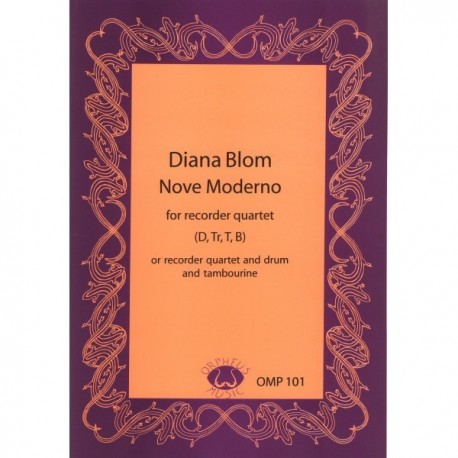 Diana Blom is a composer and keyboard player who teaches in the School of Contemporary Arts, University of Western Sydney.  The work is presented for descant, treble, tenor and bass recorders with optional parts for drum and tambourine.  Although there are written parts for each instrument and much of the instrumental writing is homophonic, the playing score will greatly assist rehearsals.  The work is built on a nine bar motif which can be seen in various guises.  The rhythmic intensity is kept by the juxtaposition of 3 crotchet beats against 6 quaver beats.  I don't feel that the percussion additions are necessary, as the recorder writing is already colourful and rhythmically interesting.  This work will pose challenges to quartets through the rapid changes of the metre, but will prove enjoyable in rehearsals and concerts.

Nove Moderno, by Australian composer Diana Blom, is at one level an etude in a type of mixed-meter playing: specifically, where a measure of six eighth notes is sometimes divided into two groups of three or sometimes three groups of two. That is, it alternates between 3/4 and 6/8.  A list of pieces with similar rhythmic patterns (hemiola) would include early music classics such as Dowland's "The Earl of Essex Galliard" and also some 20th century music such as Leonard Bernstein's "America" from West Side Story.

An ensemble wishing to prepare itself to play this type of music would greatly benefit from working together on Blom's Nove Moderno.  It begins with the whole ensemble switching together from one meter to the other, with only the simplest subdivisions.  Smaller and more complicated subdivisions (sixteenth notes) enter, and ultimately complicated subdivisions in both 3/4 and 6/8 are performed simultaneously by different instruments. The key to a successful performance might be a shared pulse of one beat per bar in the (inaudible) background.

The score also contains an optional, but very independent, snare drum and tambourine part - only rarely does it have the same rhythm as any of the recorders.  The publisher's web site labels this as a "moderately difficult" piece, but the percussion part is perhaps hardest of all.

Putting aside mechanical rhythmic considerations, the piece is quite satisfying purely as music.  In formal terms, the piece is something like a set of variations but without sharply delineated boundaries between them.  Depending on how you count them, there very well could be nine of them, and thus the title.

Various sections feature different types of textures and harmonic languages.  At one point, the soprano has an exotic, almost jazz-like, melody in G Major (approximately) with a variety of altered notes.  Meanwhile, the three lower instruments have a simple chordal accompaniment in g minor!

At another point, the score calls for "angle-blowing across windway," an interesting effect - but if done too vigorously, intonation might suffer.  This is a good choice for a group that enjoys wrestling with difficult ensemble playing issues.