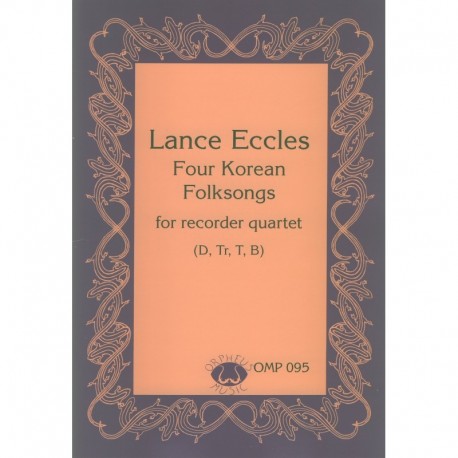 Lance Eccles has arranged several sets of folksongs of different nationalities, including Italian, Ukrainian and Chinese.  Being a senior lecturer in Chinese, his work must bring him into contact with many of the cultures and music of the East, so it is not surprising that his latest set is "Four Korean Folk Songs".

This sort of music is not well known in the West and is certainly not among the recorder players' repertoire, but it works well on recorders.  Arranged for SATB, the set starts with the "Song of the Birds". This is a lilting melody, with here and there runs of semiquavers which sound like the trilling of birds.

"The Spinning Song" is a seven bar melody in 6/8, which when played with a strong two-in-a-bar pulse, it is easy to imagine a group of Korean women sitting around spinning and singing this melody over and over again to keep up the rhythm of their spinning.  The last song "Nilliriya", is a more extended melody than the "Spinning Song".  Again, in 6/8, its rhythmical nature drives it along.  The melody is swapped about between the descant and the treble, with the tenor and bass providing a quaver accompaniment.

These folk songs are interesting to play although not demanding and offer an insight into music from a different culture other than that of the West.