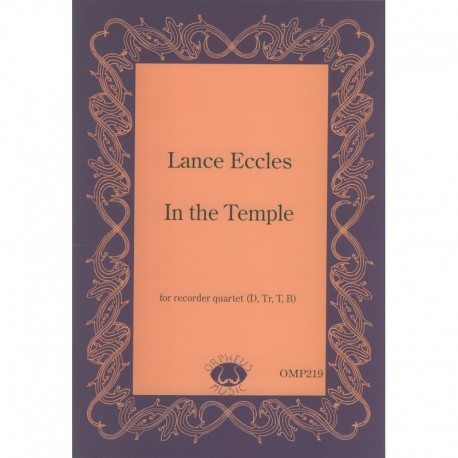 1. Entry into the Temple
2. Priestesses
3. Bacchanal

Lance Eccles is a prolific composer of recorder music whose pieces often have strong extra-musical associations. So it is with In the Temple not a spiritual exploration, but a piede of exotic tone painting.
The three movements are entitled "Entry into the Temple,""Priestesses" and "Bacchanal." In keeping with the theme, the music has very colorful tex- tures often involving overlapping patterns, which at times can even sound quite orchestral. In fact, the final movement is even reminiscent of the famous "Bacchanale" from Camille Saint-Saëns's Samson and Delilah.
Harmonies are similarly strongly drawn. While essentially tonal, the piece features a fair number of chro-
matic chords. In common with much of Eccles's work, these harmonic shifts can be somewhat abrupt, but here the effect is well in keeping with the general character of the piece.
Eccles is very familiar with the recorder ensemble, and performers will find the piece gratifying to play
The chromatic writing and occasional mild syncopations are challenges, but an intermediate ensemble will find the piece quite approachable. Typically for Orpheus, the presentation is nicely legible and accurate. While well-suited for private enjoyment, the piece would also make a rousing closer for a concert program!