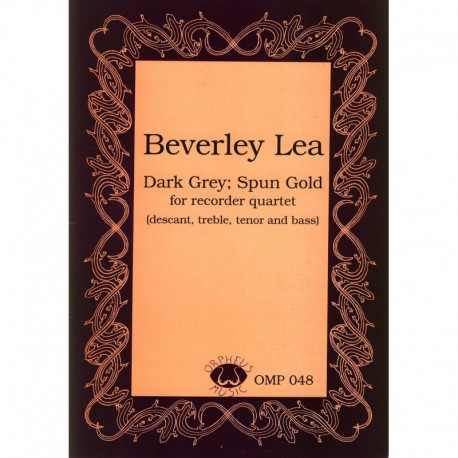 *Contemporary Pieces.* Two short pieces that use some modern techniques.

Dark Grey, Spun Gold by Beverley Lea is a two-minute long, two-movement work for quartet.  The names of the two movements are those of the two halves of the title.  "Dark Grey" is rather slow whereas "Spun Gold" is quite fast.  The only difficult techniques are the numerous short glissandi that occur throughout both movements; however, the composer provides special fingering suggestions to help players execute them. Other than that, the content is quite straightforward.  Copious articulation, phrasing, and dynamic markings are given.  To this reviewer, the work seems a bit "slight"; the material has more potential for development and further exploration than what is given.  However, it would be effective in a setting where a very short contemporary work with contrasts is needed.  The score and parts are clear and readable.

Two fairly easy pieces lasting a little under three minutes in all.  The first has a one-in-a-bar ¾ rhythm and develops its catchy opening statement through five key-changes, while the second spins its gold in a quick 2/4 time in which the punchy end of its first statement is gradually subdued and eventually banished by other ideas.  Both pieces contain glissandos for which special fingerings are given, and both evince a somewhat didactic purpose on that they abound in what are sometimes called 'teaching points'.  They will give players of an elementary standard plenty on which to cut their teeth.