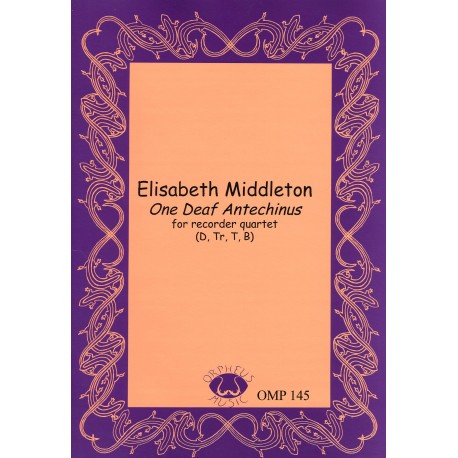 *Contemporary Piece.* Three Blind Mice will never be the same after this jazzy and fun romp around its artfully concealed musical material.

This pieces looks quite fun, especially for a group of children with some facility. The harmonic language is simple, the swung quavers fun and brief interlude from C major into A major should keep them on their toes. All four parts (SATB) have some interest even the bass player gets to zip up and down some swung quavers. At only one page long this piece would prove a good concert piece with wnough in it to get to grips wit it. Now if only I knew how to play "marsupially"....

From Taree, New South Wales, Australia, Elizabeth Middleton studied at the Sydney Conservatorium and at Sydney Teacher's College. She has taught music in high schools, keyboard for Yamaha and recorder for community music classes and in an alternative primary school. She has been a member of the Victorian Recorder Guild for some  years and has played recorder in various groups.

Her One Deaf Antechinus is a clever take-off in the "three blind mice". Instead of three blind mice, though, we have one deaf marsupial introduced "marsupially" with a series of half notes in A minor. This is followed by a jazzy series of eigths where Middleton asks fir "swing quavers". these are tossed back and forth among the four instrument. It continues with a key change and a short waltz, followed by the return to 2/2 and later in the original key.

This would be a fun and somewhat challenging piece for a high intermediate consort. The group must have a good feel for Jazz rhythms, and the soprano is asked to flutter tongue on a high G# near the end. Our consort plans to include this work into our repertoire.