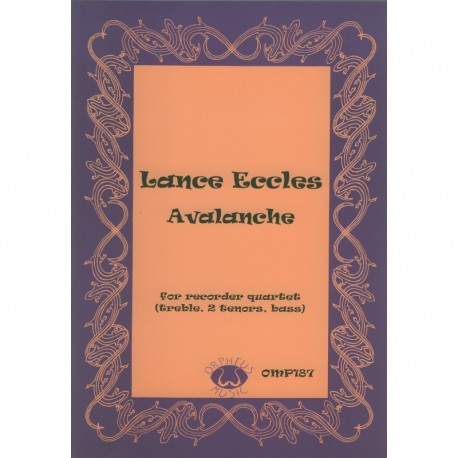 This suite of three pieces is my personal favorite of all 10 in this review. But again, I am mystified by the use of the word "avalanche" in the title, as this word conjures up some negative images that I do not hear in the music.

"Avalanche of Eggs," first in the suite, is a bitingly dissonant allegro, fun to play and hear. The alto player must perform some challenging skips, but the other parts are fairly easy. After all the dissonance (perhaps a dozen or so eggs hit the floor?), the piece ends on an oldfashioned, optimistic Major chord.

After playing through many of Eccles's pieces, I was pleasantly surprised by the romantic lushness of the second one in this set, "Avalanche of Goldfish." This is a chaconne, repeating a seven-measure harmony. The almostcontinuous, flowing eighth-notes rise and fall throughout (imagine the goldfish!). For some of the repetitions, what started out as A minor and D minor chords turn into A Major and D Major chords - a refreshing harmonic surprise. Eccles uses ascending and descending sixths very expressively - but where is the avalanche? I envision the deep relaxation felt while staring into an aquarium and watching the graceful fish!

The final "Avalanche of Frogs" perhaps suits its title more closely. It is downright fun to play and to hear.

This piece returns to the use of biting dissonance combined with effective use of flutter-tonguing. At times, the top three parts flutter away while the bass plays an arpeggiated melody. The bass part contains some flutter-tonguing, but not as much as the three upper parts. In a very effective spot, the top and bottom parts play the melody in octaves against repetitive notes in the inner parts.

Overall, this is a delightful suite of pieces: all parts are interesting, and it is very appropriate for chapter playing by intermediate players.