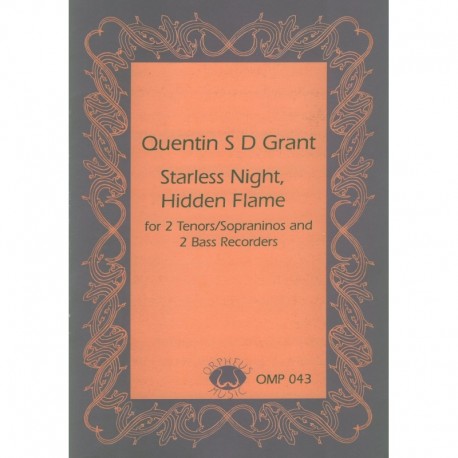 Starless Night, Hidden Flame, by composer Quentin Grant, makes extensive use of minimalist compositional techniques.  The work is eight minutes long and is cast loosely in three sections within one continuous movement.  In the opening sections, the two basses play extended drones while the two tenors play interlocking repeating patterns on top.  At times the drone texture prevails, with all four players playing interlocking ones.  Then the interlocking fragments return.  This leads to a short section marked "with an aura of sensual mysticism", in which a melody and accompaniment texture prevails within a slow pulse.  For the second half of the work, the tenor players switch to sopranino recorders, and the opening textures are explored again with the drones and fragments changing voices.  Some interesting sonorities are achieved by means of the range contrast of the sopranino and bass instruments.  Ensembles that are not used to minimalist works may find they need a conductor at first to assist in the pulsing and counting.  The music itself is mot difficult, although good breath support and legato tonguing are required throughout.  This is a good piece for groups interested in minimalist music.  For others, it might likely become rather boring rather quickly.  This is especially true for the second bass player who plays almost nothing but long drones for the entire duration.  The score is in rather small print, but is readable.  Parts are easy to read, and page turns are made during extended rests.