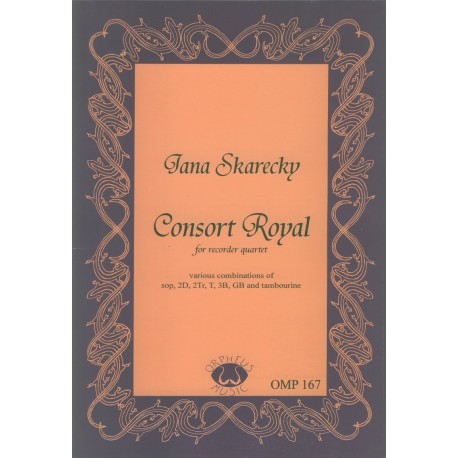 One of the most fascinating things about the recorder is its status as both an early and modern instrument. This not only makes for a great variety of available repertoire, but there are also certain interesting similarities in the musical process involved in the performance of complex Renaissance polyphony and what might be called ultra-modern or avante garde contemporary compositions. These include features such as polyrhythms, intricate meter shifts and unusual syncopations that demand a highly skilled and flexible musicianship - a collective ability to make quick conceptual shifts without compromising the tempo.

The two pieces reviewed here display considerable rhythmic complexity, as well as a highly chromatic style that also exploits the highest register of the instrument. Both works make for a serious playing challenge.

Of the two, Travelling Bugs is the more difficult, but neither one is easily apprehended. Though the two groups that played them for review consisted of experienced performers and included several professional musicians, the sight-reading entailed a lot of stops and starts. One ensemble consisted of recorder players who like contemporary music, but interestingly, it was the Miami early notation group that enjoyed them more.

Coincidentally, both works were composed by women. The theme of the Consort Royal is explicitly feminine-oriented.

The composer of Travelling Bugs, Nicola Termöhlen, was born in 1979 in Oldenburg, Germany. She is a recorder player and oboist who performs with the ensemble IL SUONO, the Hamburger Barockorchester, Concertone Hamburg, Elbipolis and others. She often plays her own works, and has received a number of composition prizes, including three awards of the Jeunesse musicale in 1996, 1997 and 1998, plus the 2002 award of the Uni-Chor in Oldenburg.

Composed in 2004, Travelling Bugs is intended to be a musical illustration of bugs taking a trip. The preface to the edition describes the great variety and beauty of the world's insect species, which move about in search of food. The preface also says that the work "depicts an assortment of bugs such as the hawthorn shield bug with its piercing accents and the red cabbage bug warbling melodies. The fire bug is responsible for action and suspense."

The composer's notes tell us that we should be guided by the qualities of these insect creatures when performing this piece. For example, the players should assume the shield-like character of the insects in order not to "get thrown off track" while making a serious effort to stay together in order to arrive at the end of the journey together. In addition to the preface notes, this edition gives instructions for correct production of the accents, fingerings and dynamics, and also indicates that melody should predominate over the beat. These indications, as well as the preface and composer's brief biography, appear in German, English and French.

Without a doubt, this piece is difficult to perform well. The time signatures are combinations of 3+4 and 3+3 over 8, and the speed of the eighth-note is about 200. An eighth-note pulse is present in all but a few measures, and it shifts among the parts. The rhythms are highly syncopated and include several hemiolas that are quite tricky to negotiate.

There is no standard key signature, but numerous accidentals appear. Parts reach up into the highest instrumental registers on occasion.

The piece demands an advanced level of musicianship, not only of individual players but in ensemble skills as well. Staying together is the greatest challenge. As with many contemporary pieces, the sound is not melodic in a traditional sense, but it does indeed resemble bugs.

Jana Skarecky was born in Prague and in 1968 immigrated to Canada, where she currently resides. She received a Bachelor of Music degree in Honors Composition from Wilfrid Laurier University in Waterloo, ON, and a Master of Music degree in composition from the University of Sydney, Australia. She studied piano and French horn, and her compositions include a variety of vocal and instrumental genres. Her work shows influence from Gregorian chant, the English modal tradition and Czech folk song. She currently teaches piano and music theory at the Royal Conservatory of Music in Toronto. In addition to her musical career, Skarecky is an artist, often painting and composing in tandem.

The Consort Royal was commissioned by the Bassano Quartet of Toronto. According to the cover notes, the group takes its name from the Bassano family of musicians who were active at the English court of Henry VIII. Because Skarecky had long been interested in this historical period and in the personalities of Henry's wives, it seemed fitting to her to make them the focal point of this work.

The individual movements are dedicated to the wives in chronological order, though they also have descriptive titles: "Sarabande" (Catherine of Aragon), "Crown of Fire" (Anne Boleyn), "Song for Mother and Child" (Jane Seymour), "Allemande" (Anne of Cleves), "Rose Without Thorns" (Catherine Howard) and "Healing Light" (Catherine Parr). The cover notes give short biographical sketches of the six women.

The cycle is scored for a variety of instrumental combinations and tambourine, with "Healing Light" also calling for a low ensemble of basses and great bass. Some contemporary techniques are required, such as flutter-tonguing and singing through the recorder.

The work is characterized by dissonance, tremolos, glissandos and changing rhythms. Conceptual flexibility is essential to negotiating the meter shifts. For example, in the song dedicated to Anne of Cleves, the time signature changes each measure in one section (2/4, 3/8, 2/4, 5/16, 6/16, 2/4), and the note equivalences shift from the eighth note to the 16th note.

Knowing the program for the song cycle, it is possible to identify the musical articulations of the wives' personalities and their individual relationships to Henry. Catherine of Aragon's piece uses the tambourine, thus implying a Spanish flavor. The top line in the song to Anne Boleyn stops before the end, a tactic that suggests her execution. Jane Seymour, who gave birth to the heir Edward VI, is described as calm and gentle, and her lullaby selection reflects these qualities.

Consort Royal, like Travelling Bugs, is more interesting for its contemporary uniqueness than traditional melody. It would make for an interesting accompaniment to a non-musical event with an historical focus.

While I would not suggest either of these works for general ARS chapter sight-reading sessions, they would appeal to experienced players who enjoy dissonance and unusual rhythmic configurations, and have a well-developed sense of musical adventure.