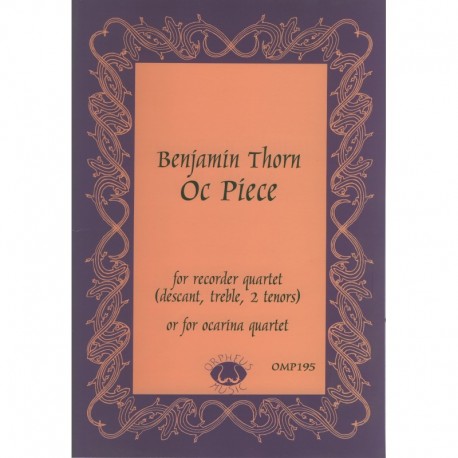 *Contemporary Piece.* Four lively and rhythmically interesting pieces. It can also be played on four ocarinas.

Oc Piece by Benjamin Thorn is the final quartet in this group. I was interested in this, as I play the ocarina myself, but unfortunately I couldn’t get three others to try it through on ocarinas with me! (Also, it must have been written for Donati' style ocarinas as the ranges were wrong for Langley' ocarinas.) However, although I can imagine the sound that a group of ocarinas would produce with this piece, I had to make do with recorders, which have more attack and do not have the softer, rounder sound of the ocarina. The four movements of ?? Piece, have no titles, but the first is described as 'funky. It is syncopated, with bar lengths changing frequently, but has a cantabile section in the middle. The second movement is a gentle, flowing piece in 9/8. Here both the descant and treble are quite high in their register, but this did not make the movement sound unpleasant. The third movement (tempo di minuetto starts with a duet between tenor 1 and tenor 2, and is very attractive and not difficult. The final movement starts with a free cadenza-like opening accompanied by both tenors, which leads in to a fast rhythmic jig which gives a good end to the whole set of pieces. 'Oc Piece' is very approachable and not as challenging as the three Eccles quartets. It is worth playing even if you haven't got an ocarina!