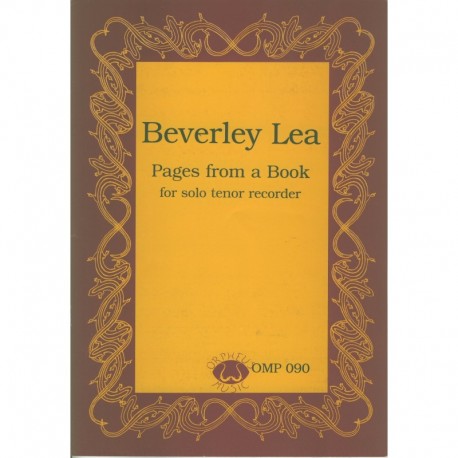 Pages from a Book

*Contemporary Piece.* Fascinating exploration of the expressive possibilities of some extended techniques.

1. Pages from a Book

Beverley Lea's recent composition for tenor recorder comprises of two broad moods, the unsettled and the serene.  Indeed the composer herself describes the opening section as a battle between two elements, "one agitated, the other calm" and it is the latter of the two moods that pervades the following two movements.  The work utilises extended techniques and all articulations are given full explanations.  These techniques are contrasted with some quite lyrical passages.  Whilst this work doesn't present anything "new" it is pleasant nonetheless and makes the most of the tenor's noble voice.

Most intriguing is Pages from a Book by Beverley Lea, a truly sui generis work.  In general terms, it can be described as playful, Romantic, and amazingly unpredictable.  Each of its four movements establishes a different mood: the first, "Combattimento" (Battle), alternates between agitated and calm sections; the second "Etereo (Ethereal), is distant and remote; the third, "Giocondamente" (Joyful), is happy and sweetly flowing; the brief final movement recaps each of these moods.

As unique as the piece is, it is not completely rootless.  In fact, Lea has absorbed many influences, but she reflects them in very personal ways.  This is not an avant-garde work - its language is moderately neo-tonal, and it is not hard technically.  The difficulties, particularly for amateurs, lie mainly in the areas of interpretation and use of colour fingerings for dynamics.