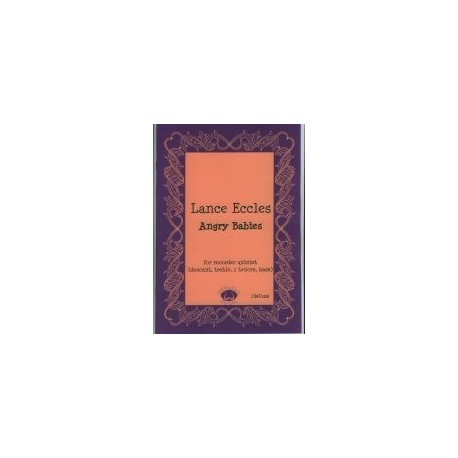 The quintet Angry Babies is a threepiece suite beginning with "Babies in Uproar." As one would expect with this title, there are sharp dissonances.

After the bass's four-measure introduction, the piece immediately jumps to a fast off-beat, calypso rhythm that is fun to play - it doesn't sound "angry" to me, but does end abruptly, like a pacifier being placed firmly in each baby's mouth. It's safe to say that most babies are not quite as rhythmic in their anger!

"Babies Asleep" is a slower-moving andante. However, within this, there is still a constant stream of voices moving on every half-beat.

The third piece, "Disobedient Babies," is again fun to play, especially for the soprano - with plenty of action leftover for the other parts. It illustrates another instance of abrupt phrase modulation - in this case, G minor to B minor, including a section in C minor. It ends with the same type of inner-voice cross relation as the second movement.

Angry Babies is described in the Orpheus catalogue as 'three nicely dissonant character pieces, which, I suppose is just how angry babies are; 'dissonant'! The three movements are written in Lance Eccles's rhythmic and chromatic style, the first being 'Babies in Uproar. This has a slow introduction with movement mainly in the bass line, before breaking out into fast movement with a calypso-type rhythm in the inner parts and bars of repeated notes. (Are these babies drumming their heels?) The piece gathers
momentum before ending abruptly. By contrast, 'Babies Asleep' conveys some calmer moments, although there are still plenty of accidentals to contend with. It is a fairly short movement, so one supposes that the babies don't stay asleep for long. 'Disobedient Babies' is the final movement. Here
there are quite a few rhythmic challenges whilst the music travels through a series of modulations, with more musical stamping of feet and some musical shouting before the music rushes to a close.

There are plenty of challenges for the players in 'Angry Babies', plenty
to work on to get the pieces right and a sense of satisfaction when you do
Janice Ormerod, Recorder Mail Summer 2009 p.73.