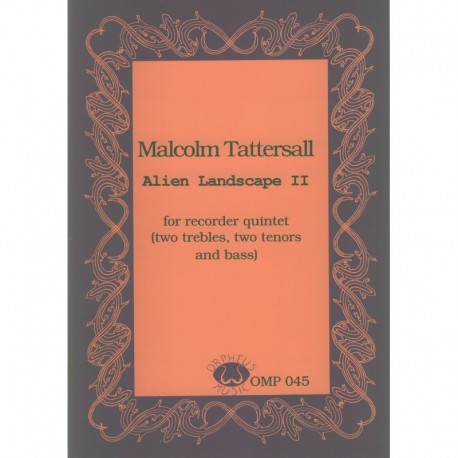 *Contemporary Piece.* Atmospheric and evocative with some contemporary techniques.

Written and originally published (by Cootamundra Music) in 1982, Alien Landscape II resembles its counterpart Alien Landscape I (1979, an electronic piece for analogue synthesiser).  Using many of the varied and diverse techniques open to the modern recorder player (covering and uncovering the labium, flutter-tonguing, tremolos) as well as effective utilisation of dynamic contrast and staccato notes, the recorder consort is made to sound remarkably akin to an electronic instrument.  The Preface explains how the music should evoke the feeling of an unknown countryside at night, where mysterious natural sounds can be heard and the static nature of the piece successfully conjures up this idea.

Alien Landscape II can be divided into several sections each focussing on a different playing technique.  All voices begin simultaneously on a dissonant chord (with covering and uncovering of the labium), and one by one the parts shift (mostly stepwise) so that any movement is almost imperceptible.  Although the piece is atonal, the dissonances are not unpleasant or jarring, merely expressing an uncertain wandering.  Once the muting ceases, grace notes begin to appear before a quasi-melodic movement ending on a gorgeous chord, wholly suited to the timbres used.

There is a section of staccato quavers which appear to have been picked randomly.  Here, as throughout the piece, the notes themselves pose no great problems, but the timing when all parts are moving independently is not for the easily dissuaded!  There is a brief period of homophonic movement (although getting everyone to play staccato quavers together at the designated crotchet = 48-56 can be "fun"!)

There is a notable section where the timbre of tenor and bass tremolos on their lowest notes is truly haunting, and another where a loose motif is passed briefly around before the last homophonic section.  The last five bars use muting and are retrograde of the beginning of the piece in pitch values (although not in time values), perhaps a final message of the uncertainty of this "Alien Landscape".

Perhaps best suited to more advanced players, not because of the notes, but for the concentration and synchronisation of ensemble required, this piece will be a refreshing new addition to the modern recorder repertoire.