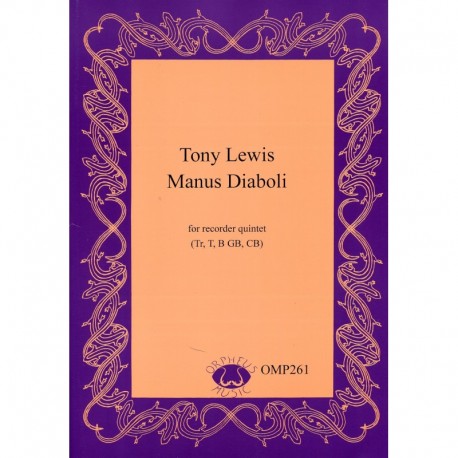 Manus Diaboli is written for five recorders, and is in five parts, titled respectively Polpolot, Khil, Dastgah, Compound and Requiem. The first three parts each present individual statements of musical material, and the final two parts develop, combine and recontextualise this material.

The name Manus Diaboli is a play on a number of diverse concepts. At the immediate level it refers to the Latin term Manus Dei, the hand of God, but translates instead to the hand of the devil. It is also a reference to the Manus Province of Papua New Guinea, which is relevant for two reasons. Firstly, it is a region in which the composer has conducted much musicological research. Secondly, Los Negros Island in the Manus Province includes the site of the former Australian WWII naval base at Lombrum, that is now used as an offshore detention centre for asylum seekers arriving in Australia. (Note the Australian media and politicians routinely refer to this detention centre as being on Manus Island rather than Los Negros; the distinction appears a step too far for those with no real interest in the region.) Manus Diaboli makes reference to the people of Manus Province, and to this detention centre that is imposed upon them, and upon their land, without their consent; it makes reference to the musical culture of Iran from where many of the detainees have arrived; and it makes reference to the unconscionable events of February 17th, 2014, in which Iranian detainee Reza Berati was murdered by people who had been employed there to ensure his safety. Several months later another Iranian detainee, Hamid Kehazaei, died of septicaemia in a Brisbane hospital, after initially being denied medical attention on Los Negros for a cut foot. This entire situation is the hand of the devil at work. Part 1 Polpolot draws musically from an indigenous two-part song form from Manus, which is characterised by movement between unison and second intervals. The polpolot genre is unmetred, and phrase lengths are contingent upon the text that each delivers. This section begins in imitation of the polpolot, gradually expands it harmonically. Part 2 Khil makes reference to the rapid and complex garamut log drum rhythms for which the Manus Region is musically renowned. The garamut is known in the Paluai language of Manus region as khil, and its music is characterised by irregular metre and rapidly shifting and evolving phrase lengths. This section takes rhythmic quotes from the Manus garamut repertoire, and develops them both rhythmically and melodically. Part 3 Dastgah builds upon the modal musical structures (dastgah) of Persian (Iranian) classical music. This musical genre does not use harmonic progression in the manner of Western music, but functions in a linear manner from a tonal centre, based on particular intervallic relationships to that centre. This section develops linear modal structures against fixed pitch references (drones), and modulates the linear forms as it progresses. It does not, however, attempt to recreate the temperaments that are characteristic of Persian music. The section explores serenity, and the hope and courage that drives people to leave their troubled homelands in search of a better life elsewhere. which brings the plight of Asylum Seekers who have been incarcerated by Australian officials to light.

QUINTET
Tony Lewis
Manus Diaboli
Tr, T, B, GB, CB
Orpheus Music OMP261 £12.00
This is a startling and unusual modern work for quintet and the instrumentation, using Great Bass and Contrabass, adds depth of sonority. Lewis humorously instructs all of the parts to start

Part I: Polpolot, with an avant-garde anarchy to "SOUND LIKE WAVES. Exhale through recorders,
without note or pitch, randomly, with no attempt at group co-ordination"!

Part II: Khil is fast and furious with lots of  changes of time signature and tricky semi-quaver swirling patterns. In the middle of the movement Lewis instructs comically all players to say Chaa chacha cha with Voice-unpitched.

Part III: Dastgah is easier and more straight-forward and

Part IV: Compound intriguingly directs players to "play as written, but do not attempt to function as an
ensemble. Do not try to align your part rhythmically with the other parts. Permit chaos"! The concluding Part V: Requiem ends this work with less complexity and winds down both harmonically and rhythmically after the frantic intended chaos of large parts of the piece.

A very original work, with many surprises and startling sounds. OS