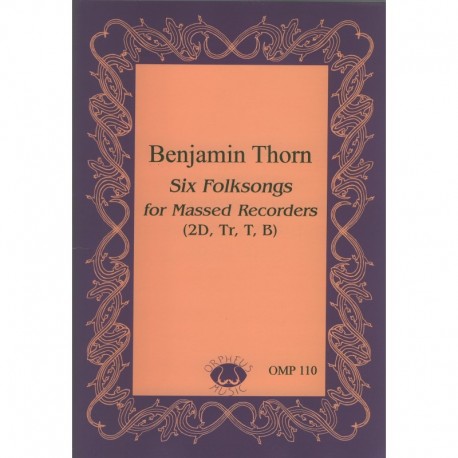 *Folksongs.* Lively and popular set of pieces from Ireland Holland and Canada designed for large (or small) groups of mixed ability with first descant part using only five notes.

Benjamin Thorn is an active Australian composer and editor of recorder music. In this set of traditional Canadian, Irish, Flemish and Dutch folk songs, he meets his stated goal of providing music "suitable for large groups pf recorders of mixed ability".

The instrumentation is the same for each folk song. Essentially, this is a setting for quartet of intermediate ability, with a simplified soprano part that doubles the melody. This compositional technique is called heterophony, where two musicians simultaneously play slightly different versions of the same melody.

In the first five pieces, this easy soprano part only uses five pitches: G, A, B, C natural and D. The last song adds low F#, E and D.

This music would be ideal for a chapter meeting or for an established group with some new members. In my opinion, five of the six songs could even be performed without the simplified part.

The score and parts are very clean and easy to read. There are no awkward page turns in the parts. No texts are given for the original tunes.

I only wish some performance suggestions had been given for "massed recorders", such as using concerto grosso techniques to create contrasting tutti and solo sections. This is a very nice set for any chapter or group to own.