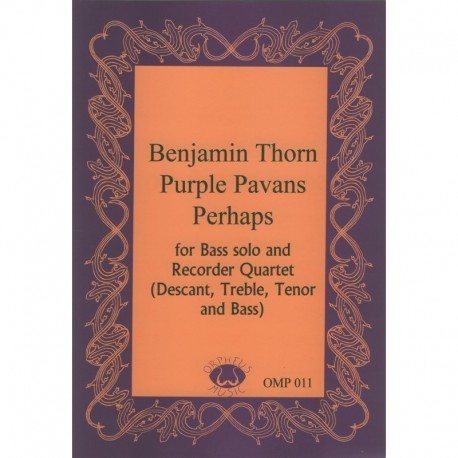 *Contemporary Piece.* Strongly rhythmic and melodic with beautiful use of the bass as a solo instrument. The accompanying quartet parts are much easier than the solo. First movement has folky melodies that build up to a climax; second is largely a bass solo over a wash of burbles while the third is a funky piece in 7/8. MD

7/8-time figures largely in two of three movements of Thorn's Purple Pavans Perhaps for the novel combination of solo bass recorder with SATB quartet.  The first movement in a steady 6/8 begins simply with alternating harmonies supporting the solo line, to which descant and treble supply countermelodies.  The bass solo becomes animated, exultant. A duet for the two basses forms a contrasting middle section.  The former music is reworked, becoming impassioned, to be rounded off by the two basses in a brief coda.  The calm second movement uses un-notated pianissimo "burbles" for descant, treble and tenor to accompany the bass solo, which is joined towards the end by the quartet bass in counterpoint.  The third movement is a lively 7/8 scamper, with a cadenza for the soloist towards the end.  The pavans play for perhaps eight minutes in all.