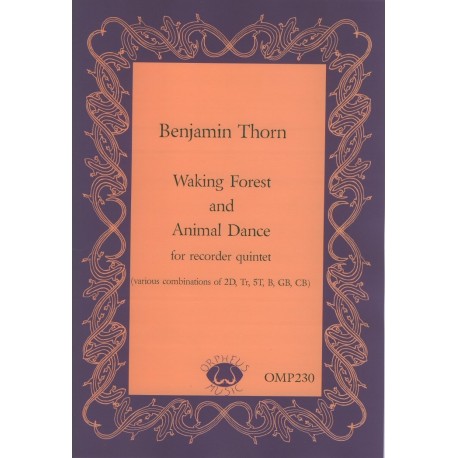 Benjamin Thorn
Waking the Forest and Animal Dance
Orpheus Music, OMP 230
The instrumentation varies throughout Waking The Forest. It starts with five tenors then one swaps to treble, another swaps to descant and a third swaps to two descants simultaneously! Animal Dance starts STBGbCb then bass swaps to treble and back a couple of times. All parts in both pieces are interesting to play and are easy to read. We thoroughly enjoyed Waking the Forest. It was atmospheric and with careful work would be a great audience piece. The music describes the title well. You need a group that play empathetically together so can add in the rubato needed and can sing and play simultaneously. The movement ends with a slightly banal pixie-esque dance.
Animal Dance has three distinct sections which I would guess refer to three different animals though it feels a little disjointed. There are unsuspected dissonances throughout which maintain interest for both listeners and players. This movement is tricky if taken up to speed and needs advanced players perform it successfully.