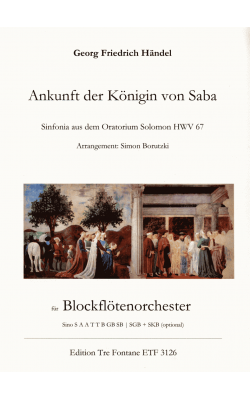 The Arrival of the Queen Sheba

The “Arrival of the Queen of Sheba” is one of Georg's most popular orchestral works Friedrich Handel (1685-1759) and comes from his oratorio “Solomon”. At the beginning of the third act, this work appears as a Sinfonia, which is its popular nickname owes the following appearance to the figure of the Queen of Sheba. The original line-up provides for two solo oboes, strings and basso continuo.

My arrangement for recorder orchestra is largely based on the original musical text, a transposition from B flat major to C major seemed sensible. The sopranino and Soprano recorders take on the role of oboes, with each solo passages different combination of voices to create a tonal variety in the sense to achieve a change of register on the organ. The middle voices interlock in the neighboring vocal groups, which makes you balanced and orchestral sound. A fermata I added in measure 58 should be used as a general pause "theatrically" become. The abbreviations appearing in the upper parts from bar 59 (16th instead of 8th) are optional and ideally to be performed with a double tongue. The recorder orchestra should be as pyramidal as possible, i.e. with as many low voices as possible in the Relation to fewer upper votes, to be occupied. If there are only a few sub-bass recorders available, a few small basses can also defeat the voice play along for the sub-bass, which is justifiable as an orchestral voice leading.

The ideal pace should be between quarter = 112/120 mm. A short and separate articulation of all eighth notes is crucial.

This arrangement is on the CD "Alla Turca" with the Berlin Recorder Orchestra Directed by Simon Borutzki at the Klanglogo label (KL 1527). Simon Borutzki Berlin, June 2020