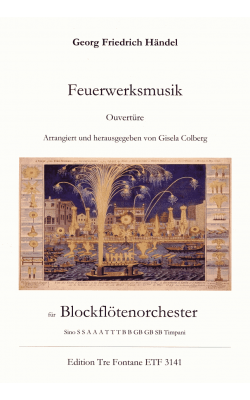 I. Ouverture from the Fireworks Music by Handel.

When the public rehearsal for the fireworks music took place on April 21, 1749, thousands flocked. Just the newspaper report that there would be a "Music composed by Mr. Handel for the Royal Fireworks" aroused such enthusiasm among the London population that the dress rehearsal in front of around 12,000 paying spectators in the Vauxhall Gardens amusement park caused the first traffic jam in the History of the city. The gentlemen had to wait for hours in their carriages on London Bridge because nothing was moving; it even came to a number of fights.

The peace celebration on April 27, 1749 in London's Green Park with the actual performance of the Royal Fireworks and their music was accompanied by mishaps: There were 101 gun salutes as the starting signal for the fireworks designed by Gaetano Ruggieri and Giuseppe Sarti and the simultaneous (?) beginning music planned. However, the gun salute did not come as planned and so the overture began before the fireworks. Whether the other movements were played as music to accompany the fireworks or separately is not documented or is controversial. In any case, the fireworks itself was a pitiful failure: the spectators had to escape under the trees of the Green Park from the overcrowding of the rockets; part of the splendid illumination architecture by Giovanni Niccolò Servandoni (Jean-Nicolas Servan) went up in flames, which angered the Italian architect so much that he attacked the English pyrotechnician Charles Frederick and Thomas Desaguliers with his sword. When it finally started to rain, the London press had enough material for detailed sensational reports, to which we owe our current picture of the origin of fireworks music. The only reason the party didn't turn out to be a fiasco was Handel's music.