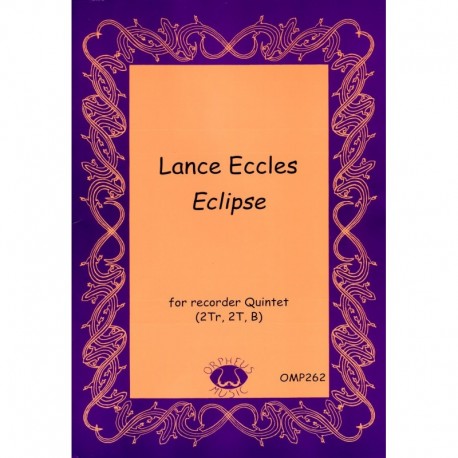 In this modern piece, Lance Eccles creates the sound of a jazz ensemble with beautiful harmonies and
chromatic passages. The two sections, Lunar Eclipse and Solar Eclipse, are each subdivided with labels, referring to what happens during that eclipse.
In Lunar Eclipse, the first section is titled "Rising moon." The top four parts play together in shifting jazz
chords. The bass has an independent line underneath that stays on the beat, only occasionally joining the other parts for dramatic effect. There is a break before the Total Eclipse" begins. The bass keeps a steady eighth-note beat while the upper lines hold longer notes, with only small shifts in pitch, until all the parts
join into two measures of falling chromatic lines at the end of the section.

This moves immediately into "Emergence from Totality. "The first almost identical to the first section,before exploring new harmonies in the last seven measures. While Lunar Eclipse has nothing
faster than an eighth note, Solar Eclipse is a livelier piece that has many 16th-note runs or arpeggios. It begins with "Sunrise." Each of the parts move independently, with the top alto line often wandering up to a high For G. In the last part of that section, the five parts come together rhythmically for three measures before the transition into "The Growing Shadow." Alternating excited measures of 16th-note activity with calmer ones containing quarter notes, there is a final burst of frantic chromatic 16ths-before all parts shift into repeated eighth notes at the end of the section.


Then comes the beginning of "Corona." This segment remains calm for a few measures, but soon shifts into activity. All four top lines play simple eighth-note passages, while the bass explodes into 16th-note runs up until the final section, "Sunlight Again." The mood shifts back to that of the original section. It is less agitated, having active parts up to the penultimate measure, with 16th-note chromatic runs leading
to the final whole-note chord.

It is easier and less dissonant than many other Eccles pieces. The composer indicates the piece should be
played with, crotchet-70. There are many accidentals, but the piece is accessible for an upper intermediate level or higher group (In case you are wondering, there was a solar eclipse visible in Australia in April 2014 and several lunar eclipses near that time-perhaps the inspiration for this piece?)

Bruce Calvin has reviewed videos and books for professional library publications over the years. He and four others meet weekly in the Washington, D.C area to play recorders. The group enjoys Renaissance through contemporary music,
performing occasionally for special church events.