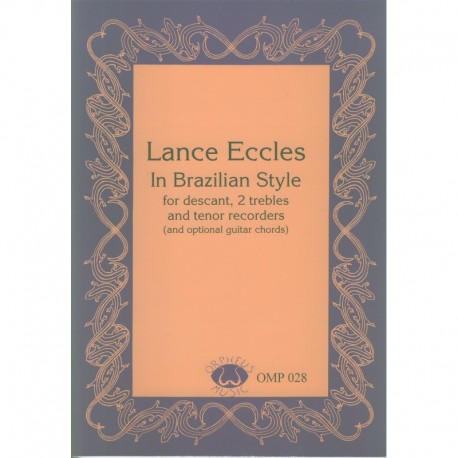 Many composers have used the bossa nova rhythms and ideas as inspiration for their new works.  Lance Eccles, a prolific Australian recorder composer and performer, has contributed In Brazilian Style, consisting of four pieces of various moods.  Before attempting any of them, an ensemble would be wise to listen to some of the great hits of this genre, such as "The Girl from Ipanema", "Baia", and "A Day in the Life of a Fool", especially paying attention to the underlying rhythms and the length or shortness of the different notes.  Bossa nova involves many a phrase of sliding over or across the main beats, like short glides when ice skating instead of regular pumping the legs for speed.  This is where a group should be relying on the percussion, or as here, on the guitar's chords and pulsations.  Anyone who simply tries to play this music straight through with a steady ONE-two-THREE-four type of beat is going to be disappointed.  The whole ensemble must listen to each other more and sense where it is they are going.

Of the four pieces, I would start with the third, "Capybara Heaven", because of its andante nature and melody.  It very well "describes" the bouncing gait of the large South American rodent of the title.  Here most of the rhythm comes from the soprano recorder while the rest of the group provides a steady pulse underneath.  Then, having developed a feel for the style, I would have everyone tackle what I believe is the strongest of the set, number four, "Ladies of Paradise".  It reminds me of the wonderful old standard, "Tico-Tico".  The soprano leaps into the lead again, as in "Capybara Heaven", but this time the first alto breaks in, picking up some of the melody lines and creating some interesting short "conversations".  It is a fresh and exuberant whole, well worth the playing.

Looking at the first two pieces of the set, I cannot be as enthusiastic.  The first, "Little Horses", struck me as too repetitive of its main ideas for my taste.  I don't think I would program it for an audience.  The second, "Birds in the Forest", seemed like a beginning sketch to me, one in which I never felt I knew where it was going - or particularly why it should want to!

I believe advanced groups and professional ensembles should add this collection of Eccles' works to their repertoires for the sake of the last two pieces.  They do need very-good-to-crackerjack players who are not afraid to try new styles (the meaning of "bossa nova").  I would even consider multiplying players on each line, developing it into a recorder-orchestra setting.  Any audience, I think, will love them.