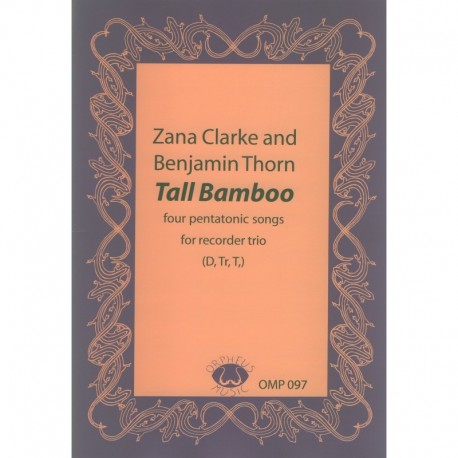 Apparently Benjamin Thorn believes that not enough music is inspired by vegetables and crocodiles (composer note p7).  I think he's making up for this by composing food-related pieces published with reptilian covers.

Tall Bamboo is a collection of four short songs in G pentatonic scale and is the third collaboration between Zana Clarke and Benjamin Thorn.  Tall Bamboo, The Long Road, Red Lily, and Rice Paddy it's pretty clear we're in for a serving of eastern inspired sound.  The songs are clever examples of creating a great deal from little - essentially the entire publication consists of the 5 pitches G, A, B, D and E.  Naturally there is a strong sense of unity between the songs, but at the same time each song has its distinct identity due to Zana's talent for melody.  The ensemble writing in each song is always rhythmic and melodic.  The easy pace of these songs and limited pitch material make them ideal for the level 2-3 players.

The opening song, Tall Bambo, introduces and cements the pentatonic material.  It has a slow, dignified quaver movement in the descant over open fifth minims in the treble and tenor.  The song is in Calmo quadruple time.  Treble and tenor duet, then take up the melody at the fifth definitely in bamboo territory here - then all instruments play different segments of melody related material a gentle confusion of mainly quaver melody to the conclusion.

The Long Road is a beautiful narrative.  The opening 8 bar melody is heard six times; each appearance is slightly different, in melody and ensemble treatment, as if relating another chapter of an epic.  The fifth occurrence of the melody is a tenor solo, giving the feel that the long road may also be a lonely one.

Red Lily contrasts to the previous two songs with its opening one bar syncopated rhythmic figure that features as the accompaniment throughout the piece.  A slow, sturdy descant melody appears over this rhythmic figure, which is then passed to tenor before being handed back in a varied form to the descant.

The final song, Rice Paddy, is in faster, triple time.  Interestingly, although using the same notes as the previous songs, Rice Paddy has the least feel of pentatonic.  This is a result of the strong G triadic nature of the melodic material.