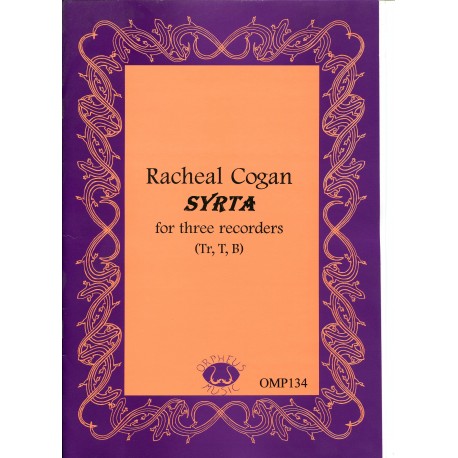 *Contemporary Piece.* A touch of Greece with two traditional Cretan melodies and two original pieces in the same style with florid ornamentation. MD

Many of Racheal Cogan's compositions are inspired by extensive study of Mediterranean (especially
Greek and Turkish) music. Syrta is a trio in four short movements based on a form of music and dance from the island of Crete. The two outer movements are original, and the two internal ones are arrangements of traditional tunes. The compositions and arrangements are straightforward the melody is primarily in the alto, decorated by the other two players.
Though the music is not particularly difficult, playing with the proper folk spirit and ornamentation will
require careful preparation (and ideally some listening to folk music). The score includes an extended note about the Cretan music that inspired the piece, and performance notes about the special fingerings for ornaments.

Carson Cooman is an active composer with a catalog of more than 600 musical works in many forms, ranging from solo instrumental pieces to operas, and from orchestral works to hymn tunes.
His work is recorded on over 10 labels, including Naxos and ABC Classics.